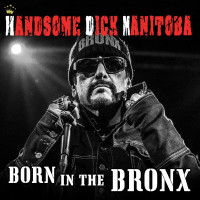 Listen, it hasn’t been an easy road for Handsome Dick Manitoba. Over the past decade, he’s faced lawsuits, loss of a business, getting fired from his job, and general chaos. To a degree, it seemed like the wild, hard running lifestyle detailed on The Dictators classics albums was finally catching up to him (even though one always assumed that the pro-wrestler bravado on those records was 50% real, 50% playful act). So, that’s why on Born in the Bronx, Dick’s first true solo album, it’s striking to see that, yes, indeed, maybe the wild rock n roll life, which he has so proudly toted for decades, finally did burn him back.

But, what’s even more surprising is that, perhaps for the first time, we’re getting the true Handsome Dick Manitoba. Without Andy Shernoff to write those soaring glam-punk chords, Dick recruits a number of friends and, somewhat unexpectedly, retreats back to the music of his early youth. Instead of riffs that smash and nod to the Stooges, we catch slight tinges of Bob Dylan and Ian Hunter. “Shelly,” which is driven by jangly guitar, could have come right off of Brain Capers. “Thicker than Blood” is a roadhouse rumbler that would do BB King justice . Look no further to Dick’s inspiration here than his cover of Barry McGuire’s “Eve of Destruction,” which, considering Dick’s usual bluster, is wonderfully sentimental. Sure, Dick’s voice is still that blown out gruff howl, but this is a man who has been through battles and he sounds like it and that’s what gives these recordings such meaning. Where they could have come off as exploitative or corny, instead, we have a certain earnest quality.

This is none more present than on one of the album’s two anchors- “The Cooker and the Hit” pulls no punches in detailing Dick’s descent into destructive addiction as set to a sleazy, bluesy backdrop. Dick points the finger at himself more than anyone else, so it’s hard not to feel his pain to an extent. But, despite his breakdowns and bumps, Dick unpredictably has a sunny view of things. The album closing title track finds Dick looking back fondly on his youth and recounting all the great things the Bronx has to offer. Notably, he focuses on simple things like cheap food, subway rides, and pretty girls. Also, notably, he seems to focus on the past.

Listen, Handsome Dick is no saint and the people that hate him could fill a baseball team, easily. But, he doesn’t try to shuck any of that here. Instead, he objectively paints the picture of himself, highlighting both the good and the bad. This is neither self-glorification nor is it public apology. What it really is, is that, for the first time ever, we’re hearing from the real Dick Manitoba- handsome, ugly, or anywhere else in between.