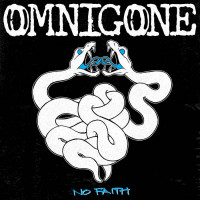 Perhaps, for the first time, Adam Davis is being Adam Davis. The former road hog now kickboxing instructor earned his bones in a later day version of Link 80, touring with that band incessantly and adding a sort of big man aggression, but also playing to the third wave virtues. After that, he took to the decidedly more post-punk DESA and played into a form of rock that, at the time, was very new. After that fell apart, he got married and became a full grown adult. The reaction of which, was to create the inimitable (and stellar) Gnarboots, a freakish ensemble that tipped its hat to the performance art of the Residents. But even with that unit, which seemed to be Davis’ ID come to life, there seemed to be an adherence to one particular ideal.

That’s not true on Omnigone, Davis’ new project where he plays with new and former bandmates. (Aaron Carnes of Gnarboots is here, as is Justin Amans of Kitty Kat Fan Club, Barry Krippene, too, Steve Borth of Link, and a bunch of others). Instead of purposefully playing into genre (or speeding away from it by reaction) Davis seems to present himself openly and earnest for the first time on No Faith (an interesting title from a (former?) Mormon who recorded an EP as “Primary” and re-cut a bunch of Mormon school songs as crust-punk bashers…)

Ska does for the backbone of this release, for sure. “Stitch in Time” has the jump charge of the best of Madness. “Horizontal Aggression” nods to both Op Ivy and Skankin’ Pickle. But still, even though the snappy Jamaican element is here, Davis adds a steely, angry guitar to almost every song. Opener “BTC”’s guitar could have been on AC/DC’s High Voltage while the title track has a harsh fuzz that could have been jacked from a Tragedy record.

That’s no accident. Davis’ anger here is palpable, even though in the past five years or so, he’s seemingly found peace in teaching exercise classes and his rather Mayberry type home life. Again, the title track is delivered with a searing hot rage, while songs like “Six Feet Down” and “Obituary” both look at the Grim Reaper’s sickle - “when the clock strikes twelve, are we gonna be six feet down?”

But, maybe that’s where the key of the album is. Davis rages throughout this record. Heartbreak, soul crushing jobs, and needless infighting are all detailed here. But in most (but not all) Davis alludes to the way out, even while reveling in the blackness. “Obituary” finds Davis calling out “Don’t let your obituary describe you as ordinary.” At once, he’s ,mentioning death, but also mentioning that there’s still time to get done what you want to get done.

Listen, it’s not easy to make a non-cheesy ska (or ska-ish) record in ’19. But not only did Davis find the way, he did it by forging through a path littered with depression, rage, misery, and regret. And, that’s probably why this record is so interesting. The beat might be sunny but the message is black… until it isn’t so black anymore.

Child Bite: Blow Off the Omens