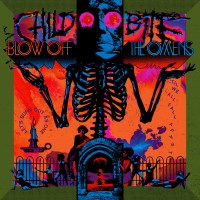 Child Bite has been thrashing around the greater Detroit area for almost 15 years. They’ve always been interesting, but they really started hitting their stride with 2012’s Monomania. Since then, the quartet has been cranking out consistently weird, wonderful, aggressive, genre defying music. Even a recent major lineup change could not slow down this rock and roll juggernaut. Blow Off the Omens is their latest installment of punk, metal and noise. It’s their third release of 2019, joining splits with Ringworm and Brain Tentacles.

Child Bite can be a challenging band to listen to, and Blow Off the Omens is no exception. Even though the individual songs are a bit longer than recent releases, at only nine tracks it’s still relatively easy to digest. At least by Child Bite standards. This would be a fine entry point for those who haven’t yet dared to take the plunge. Their studio records have gotten much better at conveying the chaos of the band’s live show.

Highlights? It’s not easy to single only a few things out, but I will try. Opener “Mock Ecstasy” is great. “Vexed Life” and “The Wrong Ones Breed” are disturbed ragers. The one two punch of “Disposable Hysteria” and the title track closer are also exceptional. All the songs are strange and compelling, but I definitely don’t hear any top 40 hits. The fickle music buying public probably still isn’t ready for Child Bite. It’s a shame.

The year is rapidly coming to an end, so my last few reviews might be a bit truncated as I rush to finish everything I deem worthy. Let me conclude with this (yes, I am yelling): IF YOU’RE A WEIRDO WHO LIKES STRANGE, HEAVY, FUCKED UP MUSIC, YOU SHOULD CHECK OUT CHILD BITE AND BLOW OFF THE OMENS!

The Dirty Nil: Live in Toronto