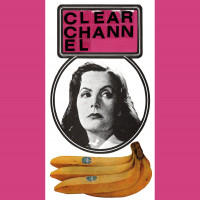 Featuring members of Downtown Boys and Gauche, Washington, DC’s Clear Channel play propulsive post-punk that is equally likely to be dead serious as it is full on whimsy. Yet, in either mode, the band seems to bite back against “normal values” through example in lieu of bold declarations.

Take “Hot Fruit” as an example. A warped, almost sinister sounding dance number, the band calls out “I’m looking for bananas, show me your bananas, I wanna see bananas, two big black bananas!” It’s not hard to figure out what they’re talking about. Also, the song is good and hilarious. Similarly, “Mira (Rapido)” is almost entirely composed of bassist/vocalist Mary Relegado screaming “mira mira mira mira mira!” over and over again. We don’t see the band directly declaring that they are making a point about sexuality or Latinx issues, but somehow, they seem to be doing just that. “Hot Fruit” seems to be defiantly self-aware and proud in its identity as does “Mira.”

It doesn’t hurt that the more low-rumbling post-punk numbers really kick. “My only complaint” is driven by an icy bass line that would make Joy Division jealous. A broken-robot buzz screeches through the dance-punk drive of “Baltimore Blitz” that takes what might be a strictly catchy number and turns it into something aggressive. It’s also fun that usually, one has no idea what the band is singing about, even though it’s clear that they’re singing about something specifically. “Never let go of you sippy cup/your sippy cup holds the juice,” they declare on “Baltimore Blitz.” Is this abstract art, is it coded language, or is it dada randomness. I don’t know and I like that I don’t know. See also the wailing “BBI” which takes the dark, Bauhaus crunch and inserts a robotic, R&B vocal over top as he band calls out “baggage, international.” If Q Lazzarus joined New Order after Ian Curtis passed away, it would probably sound like this.

This band is as interested in making direct points as they are dropping puzzle pieces and that’s probably the main thing that makes them as fun as they are spooky.