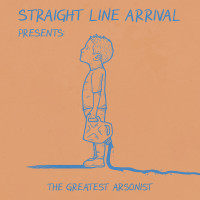 Straight Line Arrival returned in 2019 with their third full length The Greatest Arsonist. For those unfamiliar, SLA is the brainchild of Folk Punk powerhouse Skyler Husebye of North Dakota. I don’t know what it is about the desolate wasteland of North Dakota that is breeding these musicians, but I cannot complain about SLA or one of my other favorites, HappyHappy.

The Greatest Arsonist is a concept album that tells the story of an angry younger person who hates the town that he calls home, so as he is plotting his escape, he also plots the greatest case of arson ever performed: burning down an entire town as his goodbye. In addition to being a concept album, it’s the first time that Skyler brings with him a full backing band, and a sound that escapes the traditions of his Folk Punk roots. With this backing band, SLA bring their sound closer to some of the early emo bands, with a Punk/Folk Punk flare. The mellow guitar, attached to Skyler’s brilliant lyrics and unique vocals, emit feelings of depression, anxiety, and anger, which set the tones that the lyrics and story need to be as effective as they are.

The first song on the album, “Bloody Knees”, struck me upside the head the first time I heard it, as the story begins with an aging youth contemplating the feelings of his childhood, and how he wished anything could emote the feelings he had when he did something as simple as scraping his knee. The character pleads with himself to find something, anything, that would give him the same feelings he had when he would scrape his knees and had someone to run to. He asks “Who supposed to clean these wounds? / I miss the world the way it was / and I hope I get to see it again soon” as he recalls having someone in this world who he could count on when things got tough.

The story continues, and eventually you get to what may be my favorite track “We don’t die alone”. The character recalls being born “with my umbilical cord wrapped around my neck” and continues on in a depressing review of his life since that first tragedy. “Will you cry for me / Will you miss me like you missed your baby?” begs the question if the character truly has no one, or if he his pushing away those who do care for him. The repetition of the line “It scares the shit out of me” furthers this question, giving the character even more depth than just a depressed individual running from himself, and leaving his world in ashes as he escapes.

If for nothing else, I recommend this album for its story, but in addition to a great story, Skyler was able to create a truly emotional roller coaster in a more emo type fashion, as opposed to his traditional acoustic folk punk. This is the second time this year a traditional folk punk band has broken free of the acoustic chains, and with it came an album that really blew me away. I’m not traditionally a fan of the emo genre, but it may be time for me to revisit some of the albums that top that sub-genre, to compare what I believe to be a great emo album with what the rest of the emo world considers great.

Micah Schnabel: The Teenage Years of the 21st Century