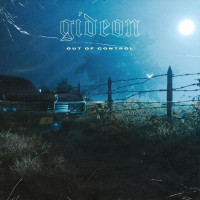 You know how sometimes you’re really looking forward to a band’s new record, you really enjoyed the last one, you felt an affinity with the band, like they were partially yours, you know? Then the record finally drops, there’s been a music hard left turn and all of a sudden they’re a band you hardly recognise and you feel weirdly deflated and kind of let down? Well that’s not what’s happened here, but there is a reason for this bizarre preamble; I have had a number of instances of exactly this experience in 2019 and the list of albums I had high hopes for that were subsequently dashed has grown longer than I would like or had expected in a single year. The relevance to Out of Control is that Gideon have taken a seemingly significant artistic change of direction from 2017’s Cold, but it’s one that I am whole-heartedly behind.

For the uninitiated, up to and including Cold, Gideon could probably be characterised as a very good, but ultimately functional hardcore band. Some bangers, some stuff that didn’t hit so hard, backed up by a strong live show and a sound that was basically hard to dislike if you’re into hardcore, but it was unremarkable, in the main. As such, when this record was due for release, I approached it with optimism, but limited expectations. As soon as I saw the album artwork, I thought things felt different. Dark, but not in the earthy way I’ve always thought of Gideon. Then I pressed play. After the 50 second intro track ‘welcome to S town’, in comes ‘SLEEP’ (most tracks are fully capitalised in the listing). Throughout the song you’re introduced to rhythmic, pulsing sub-bass, scratching, half-rapped, super aggressive vocals, dynamic production, various harmonics and Korn-style percussive sounds from both guitar and bass, and huge drops/breakdowns. The main takeaway from this first proper song is that things are less organic than before, but not necessarily in a bad way. Next track ‘TAKE ME’ pushes even further, with moments of acapella vocals, a swelling chorus with a melodic lead guitar line that doesn’t sound like Gideon of old…but it sounds fucking great.

I won’t take apart every song, but the nu-metalisms keep coming thick and fast, however not in a way that I find shoehorned or hackneyed (like the Blood Youth record from earlier in the year, for example). The drums snap with hip-hop punch and rhythm, the added passages of melody pull the songs along at a great pace, the guest spot from Drew York of Stray From The Path brings a real live hardcore show feel to proceedings and although they might not be overly complex, the songs are genuinely anthemic and they do hit hard. Now of course, a hardcore band can’t go down this path without upsetting some of the ‘OG Hardcore’ crowd and I’m sure Gideon know this, but I hope that this record, complete with scratching/instrumental interlude, nods to the likes of Limp Bizkit and Korn and basslines that wouldn’t be out of place in a Cypress Hill track, will bring in plenty of new fans even if it does alienate a few old ones.

I accept that some people think these influences should stay in the past. I get it. But it’s the execution here that makes it work as far as I’m concerned. I’ve had so much fun listening to this record that when I see these songs live (later today), even at the ripe old age of 36, I can see me temporarily being drawn out of mosh pit retirement. Let’s make no bones about it: this music isn’t for chin stroking, it’s for spin kicking.

Micah Schnabel: The Teenage Years of the 21st Century

Apes of the State: Pipe Dream