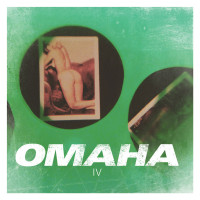 Omaha doesn’t beat around the bush. They’re direct and relentless in their approach, coming at you hard and shoving their rage down your throat. For as talented and technically precise as they are, they’re not going to waste your time showing off and getting cute. They play with a skillful focus without appearing like they’re flaunting. On their new LP, IV, Omaha gets right to the point with no ulterior motives – to bash in your brain with pounding snare strikes and pull it out through your ears with slick, metal-laced riffage.

IV is as thrashy as it is melodic. It’s the anti-gateway type of skate-punk record. I don’t want to say it’s “advanced” necessarily, but it’s not going to be the entry-point to any future punk rocker out there. There’s no sunshine or summer days baked into these tracks. Instead, you’ll hear expressions of blue-collar grit and this sort of underdog mentality in their lyrics. This all comes out in the tonality of Jason Steffan’s vocals, as he brings a scrappy sense of combativeness in his delivery, epitomizing who the band really is.

This record comes several years after their most recent release, Touch ‘em All, Joe, an album title with an obvious nod to their hometown Blue Jays and the famous call of Joe Carter’s World Series-winning home run in 1993. Touch ‘em All, Joe was fast and fresh with an MxPx-style of pop blended in, whereas IV is hyper, dark and in-your-face. It’s clear that a lot has changed with the band over the years and it comes out in these new songs. They now have a rougher edge with an almost chip-on-your-shoulder mentality that becomes apparent early on. “Without a Pulse” and “Karma Suits Ya” are like the Jose Bautista and Edwin Encarnacion of the early-2010’s Blue Jays - an imposing, back-to-back power-hitting force that’s impossible to avoid. Both tracks are mean and aggressive, and carry towering choruses, most notably in “Karma Suits Ya.” Fueled by face-melting solos, the blaring “Is it normal? / To have sorrow” lights everything up and ignites a 450-foot bomb that explodes with the centerpiece line, “The blood is on your hands” throughout. Similarly, and further down the tracklist, “Idiocracy” boasts a huge hook born out of chaotic and blistering chords that shine in a thematically gloomy song.

Even when they layer in down-tempo transitions and scratchy melodies, like in “Again Someday,” the intensity doesn’t get diluted and is balanced with harmonies and backing vocals. “80-D,” although more ferocious, follows a similar structure, ripping through the speakers with never-ending momentum. The track, a juvenile play-on-words for A.D.D., details disorganization and lack of personal focus, which I can’t help to symbolically relate to the opener, “With Our Eyes Open.” It opens with a very Implants-like intro, but it’s the only instance on IV where Omaha loses that control and attention to detail, failing to reel it all in. From there, you’re taken on a trip fueled by melodic skate-punk covered in a murky film. The backdrop is cloudy days and life’s struggles, where your feet are laced up in weathered boots and not in the sand.

Apes of the State: Pipe Dream