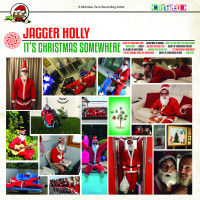 I have a lot of Christmas spirit for someone who has no plans for Christmas this year other than working. The truth is, my jaded punk heart still holds a special spot for Christmas right next to my special spots in my heart reserved for dive bars and Doctor Who reruns. So I was the weird one who posted in our secret Facebook group we have for Punknews reviewers (in which we talk about you, specifically you, the person reading this, all the time) that if any punk Christmas albums came up for review I would love to take a crack at one, at which point Pete Vincelli offered to let me review the Jagger Holly Christmas album. Knowing literally nothing about Jagger Holly whatsoever, I immediately jumped on the opportunity. I learned that apparently Jagger Holly is a blend of punk, indie, emo, and surf that I could probably take or leave under different circumstances, but for their Christmas album, It’s Christmas Somewhere, Jagger Holly infuse their Christmas tunes with a bit of postmodern irony to create a uniquely clever Christmas album.

Jagger Holly gets to the real heart of the holiday and explores all the emotions of Christmas from the disappointment of asking for the Springsteen box set and getting John Cougar instead, to the frustration of nobody else sharing your love of classic holiday film Jingle All the Way, to the desperation of trying to get Santa to put you on the nice list and forgive you for all the drugs that Satan made you do. Truly, Jagger Holly have a lot of fun on this album, and their heavy use of samples from famous Christmas songs and movies makes the album particularly whimsical. The album is framed with three instrumental tracks named “Ghost of Christmas Past,” “Ghost of Christmas Present,” and “Ghost of Christmas Future.” As the album kicks off with the “Ghost of Christmas Past,” the track begins with the theme from A Charlie Brown Christmas before a record scratch that shifts the track into an instrumental surf tune that ultimately culminates in a rendition of the 1960s Batman theme. Then, after the dated sound of an analog radio searching through stations, we’re brought to “Christmas in Hawaii.” But wait, isn’t there a well known song about Christmas in Hawaii that was popularized by known scumbag Bing Crosby? Of course there is, and Jagger Holly are quite aware of it, throwing a clip from the famous Crosby song at the end of the track with a wink and a nudge. In another playful move, track four is called “Santa Baby” yet it has no relation to the 1953 Ertha Kitt number of the same name. But probably the silliest part of this album is the outro on the last track where the band gives a spoken sign-off over the original recording of José Feliciano’s “Feliz Navidad” and then just let the track keep playing for nearly a full minute after the sign-off, essentially just putting someone else’s song on their album. Some might call that cheap and lazy, but it’s pretty hilarious to me.

Unfortunately the album has one fatal flaw, namely that Christmas emo doesn’t leave you with a lot of options for subject matter, and far too many songs end up being about missing someone at Christmas time. Even the song titles start blending together and sounding like they’re stuck on a theme: “Alone,” “All Alone on Christmas,” “Holiday Without You,” “I’m Not Coming Home for Christmas.” There’s only so much the album’s playful irony can do to compensate for the repetitive subject matter before it starts to get a little bit tiresome. Still, there’s some real sparkling moments in this album and, if you’re having a Christmas party with some friends who are a little bit rock and roll and who don’t mind a few slightly off-color jokes here or there, it’s a good album to put on.

Powerplant: People in the Sun