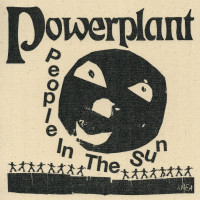 There’s an excess of words you could use to describe a punk record like this, as reliant on electronics as it is. Electro-punk, cyber-punk, synth-punk, and have we decided if we’re actually using the term eggpunk unironically or outside of its meme culture roots? If you’re unclear what the term means, there are better, purer examples of the sound out there, clearer distillations of the microgenre, but for my ears this is the hardest working record in its class.

A hallmark of this album, and to a lesser extent its genre, is the forceful control exerted over all of its machinations. People in the Sun, the debut LP from one-man London operation Powerplant, is powered by its tireless rhythm section, spitting out a sneakers-skritching-on-a-gymnasium-floor drum tone supporting a scaffolding of icy cool synth tones, poppy and spunky key releases, and an impressive yet humble, and adequately reverb’d, clean-throated vocal delivery. Much of the album feels like an electronic cascade through your innards, full of descending structures that drop your stomach again and again. While there are delightfully chunky dollops of great songwriting throughout, on first and second listens People in the Sun is foremost defined by its tones and sounds, the color choices speaking louder than the form they depict. Its chock full of busted speaker tones, and liberally dosed with musty old Halloween notes and others still that feel ripped straight from public school educational VHS tapes. There’s perfectly timed and irritating yet welcoming repetitive pings and dings keeping cold robotic time, cheesy laser gun effects elated to play the role of exuberant cymbal fills, or wearing the mask of a guitar solo. And much more coming later in the record when the listeners focus is so much less about the instruments and sounds and programmed machinery performing on this tape that the truly very good songwriting becomes chiefly apparent.

This album is powerful music. Tracks like “True Love” lay bare all the pop sensibilities informing the art, and combine with the unconventionally electronic tools and textures to gel into a comfortable yet unsettling strain of hypnopunk. My favorite track of the album, “Dungen” excels with such a melody making joy that silkily slides along the underbelly of the vocal crooning. “In White” and “Snake Eyes” both speak in a more familiar voice of three chords and quick, snipped vox. “Get in the Trunk!” rambles on over a pitch-perfect video game approximation of a classic arcade chase/race, adding to the textural collage of sound source similes of those found in knockoff battery powered handheld soccer games or dive bar nudie match game machines. “Take My Money” is perfectly exemplary of several tracks that are just dynamite 80’s new wave sounds intoxicatingly contorted into lo-fi synth-punk. Finale “Warm Skin” expands the scope of the album with its ominous big-stage feel, and most clearly telegraphs the undercurrent feelings that something bad is happening beneath the surface of all of these songs, a thread began in track one that overflows here at the conclusion.

Diving heavily into both grime and sparklingly clean palettes People in the Sun reveals more diversity and inventiveness with each listen, deriving as much from Violator as Raw Power. What’s here on this record is an album so bare, some guy alone programming a drum machine and hammering away at digital keyboards in an uncannily familiar yet inventive manner, that the connection between artist and audience bends toward an almost uncomfortable intimacy. The artist behind Powerplant elevates himself through People in the Sun to this ‘too cool’ figure, towering above the dingy and cavernous sonic landscape that forms the albums roots, on a stage elevated by the cheap flash and honest earnesty of sweating line after line into polyester vests under hair grease, skinny cigarettes, and hand-me-down mustaches. A formidable, imposing gaze into punk’s past and future, while all the while feeling too elusive and ethereal to pin point to its place in the present.