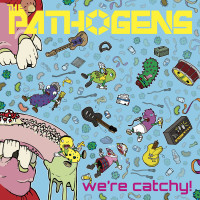 You can take the punk out of the bay but you can never take the bay out of the punk. The Pathogens is the new-ish Bay Area punk band fronted by Tilt’s Cinder Block and Blatz’s Jesse Luscious... except that Luscious now lives in Merry ‘ol England while the rest of the band is mostly west coast-ish. Despite the chasm that now separates the individuals, their debut release is fully informed by the Gilman scene and its ilk.

We’re Catchy is fast, rowdy, and funny. “Rattle the Cage” exhibits the playful, almost naïve, mischief heard on many of those early San Fran/Berkeley classics: “Let’s do something bad/ because we can can, because nobody suspects…” Whereas many bands spend most of their records decrying the ruination of the world (and there is some of that here, too) Pathogens revel in the chaos and see disorder as a way to right the current wrongs instead of being overwhelmed by a dire situation. See also “Freaks on the Street” where Luscious and Cinder Block trudge through a miserable day only to find light at the end of the road at night, when they can let their freak flag fly. (Interestingly, the track charges so hard it almooost sounds like early Iron Maiden. Whoa!)

It’s nice that the band does balance the youthful optimism here, though. “Never Say Die” has the lyrics of crust punk grinder but it’s set to bouncy, punk snap. And really, that’s what ties this whole release together. Although the band hits some heavy issues, albeit sometimes from a whimicsal view, they set the whole thing to a bright, scrappy punk charge. At times they veer towards hardcore roughness and at others, a bomping faux-rockabilly swing. These frenzied moments make the whole record fun first, leaving the aftertaste to jar your brain into contemplation. A spoon full of sugar makes the medicine goes down, as it were, and that works just fine here.

Of course, it wouldn’t be a bay area punk record if it didn’t have its fair share of heartbreak tracks. Those are here too, and they are thankfully skewed. “Johnny Hit and Run jenny” detaisl crazy exes to such a wacky level it alsmot feels like one of the famed Johnny Cash/Shel Silverstein records. “Rad Dad” is about having the hots for someone’s dad at Gilman and that is hilarious… and, as many punks cross the 40s, poignant as well. “There’s a red hoooot daddy I gotsta knooooow” Cinder Block wails at the end in a roadhouse blues twist. I laughed out loud. You will too.

Yes, the hallmarks of classic bay area are here, but that doesn’t define the record so much as ignite it. This isn’t a band playing into the bay area mold, it’s a bunch of people that formed the 90s bay area sound doing their thing and being true to themselves. It’s just a nice bonus that this calls back to the bay sound and it’s a nicer bonus that this is a highlight in the careers of any of the musicians involved on this record.

Powerplant: People in the Sun

Jagger Holly / The Windowsill: Saving The Genre, And You Know It...