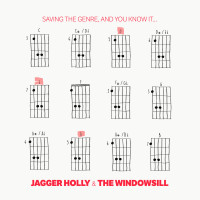 There is no time like the present to be a fan of 90s pop punk. This year has brought us many great releases from both classic bands and newcomers alike, from across the globe. This split 10” release pairs American band Jagger Holly with The Windowsill from the Netherlands. You might be familiar with their respective members previous bands such as Johnie 3 or the Apers. This international pairing of long running bands has resulted in a short but sweet release.

Jagger Holly opens Side A strong with “Nobody Wants You.” Unlike many pop punk anthems with Weasel-like guitar intros, this track boasts vocals right at the song’s commencement. This all leads to a strong off-key chorus, reminiscent of ALL. A cleverly placed breakdown bridge takes the listener to the outro of this leadoff track. “Out Of Luck” features strong backup vocals throughout. This track pays homage to genre definers Mr T Experience and even slightly the Descendents. Jagger Holly slows things down a bit with the 50’s “golden oldie” styled “Better Off (Without You).” Though this track seems displaced, it is a nice break from what otherwise could have been a very monotonous Side A. The final track on this side of the wax entitled “All The Boys” will take you straight back to when you ordered Lookout! Records releases from reading an ad in Maximum Rock N Roll. All the usual elements of a strong American pop punk track are present, helping close out Jagger Holly’s contribution.

The Windowsill offer “Cigarettes Kill” as the leadoff track to Side B of this split. This song boasts something unique for this genre in the call and response vocal pattern in the verses. Solid backing vocals are present as well. On “Don’t Worry Baby” the band pays homage to classic Ramones. This one will make you want to grab your significant other and hit the dance floor. It is hard to top the Queers for this style, but the Windowsill shine strong on this bubble-gum track. The classic Lookout! sound is strong and present on “Leads Back To You” which kicks off with a solid intro lead that has defined the genre. Fans of Screeching Weasel will gravitate to this track the most. The Windowsill close out this split release with the ambitious “Last September.” This mainstream rocker easily could have been a strong contender for a 90’s alt rock hit.

Fans of classic as well as current pop punk should check out this release. It has all the elements I find appealing of a split release. The songs are short and catchy enough to give you a good taste of what each band has to offer. If you have been paying attention to the genre, you would agree that both Jagger Holly and The Windowsill have been doing their part in helping to save it!

Dark Thoughts: Must Be Nice