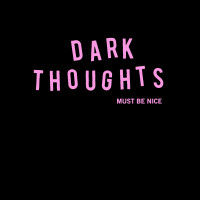 Philadelphia’s Dark Thoughts might be my favorite band going. In the past couple of years, they’ve put out two of my most cherished records, Dark Thoughts and At Work. These couple of records cover the same ground, worshipping the Ramones with a raw vigor and euphoria that makes every second absolutely vital. Each buzzes and rushes with a pure manic energy, lots of memorable songcraft, and a genuine punk zeal.

Now with Must Be Nice, Dark Thoughts are threatening rarified air. I know I might get killed for this, but I feel like Must Be Nice caps an opening trilogy that nearly rivals the perfection of Ramones, Leave Home, and Rocket To Russia. This is fantastic stuff that deserves more attention.

From the jump, Dark Thoughts frontman Jim Shomo mixes his Joey Ramone-like croon with a straining raspy howl at the end of certain lines on “Hesitate” as the song hurdles ahead on the ride cymbal of drummer Daniel Cox. First single, “Do You Dream”, is catchy as all get-out as Shomo bellows almost-romantic lines like “do you dream of me, like I dream of you?” and “holding each other close just for one more day, cuz I’m waking up without you anyway”. “Terrible Things” and “Silhouettes” are perfect anecdotes to lethargy. Shomo sings and yelps frantically on each, holding notes and pulling the “oh-uh-oh”-style vocal stunt again and again to delirious effect. The hooks are fantastic and the melodies are infectious. Over and over again you’ll want to sing along. And maybe the catchiest of all, “You Gotta Find”, has a howling vocal hook that sinks its teeth into you. Later, “I Can’t Remember”, the first song to break the dreaded two-minute mark, throws a couple of curveballs, opening with just a tamed Shomo and a buzzing guitar before the full band breaks out into another dizzying anthem, even dropping out just long enough to give rock-solid bassist Amy Opsasnick a moment to shine.

And when they slow things down a bit, as on “Skin Like Paper” and “Scan The Radio”, they manage to keep the guitars simple, driving, and buzzing, offering up another romantic notion as “Radio” closes with “just wanna be with you, listening to the radio” over and over. Closer and record namesake “Must Be Nice” is the longest song on here, nearly scaring the three minute mark. Behind a mid-tempo rhythm, a catchy vocal melody, and some melancholy lyrics, Dark Thoughts offers the biggest surprise of the record with an almost-sensitive moment as Shomo croons “it’s so easy to be lonely, it’s so hard to be loved” over nothing but a buzzing guitar. Before the record closes, pretty backing vocals and melodic bell-like effects add some atmosphere and maybe point a way forward, possibly hinting at a Road To Ruin / End of the Century-style next step.

On Must Be Nice, Dark Thoughts have done it again. The shambolic hi-hats and driving ride, the stampeding bass and the charging guitars, and Shomo’s endearing croon. All the parts are there, and the songs hold up to create another classic. There’s not a dud to be found. My only complaint is that it’s over so quick. This is likely my favorite stuff out there.

Jagger Holly / The Windowsill: Saving The Genre, And You Know It...