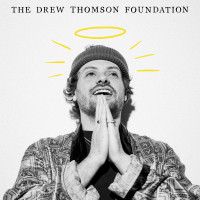 We've gotta start with a word on biography vs fiction.

I don't know Drew Thomson, the lead singer of the satisfyingly cruel hardcore-adjacent Single Mothers and the author and creator of The Drew Thomson Foundation, a collection of EPs, singles and loosies. I can't speak to anything beyond the text of the album and a handful of interviews. Are the songs here, in which the narrator talks about - amongst other things - sobriety and his newfound stability to be taken as facts of Thomson's life (who has, in interviews, spoken about his sobriety and the volatility of his other band)?

On top of that, does it even matter? Thomson's gift as a songwriter and lyricist is that his product makes you ask the question in the first place. He's haltingly clever, so much so that it can be off-putting (album opener "Karma" is rife with the trademark Thomson sneer, both in the creation and delivery of lines like "This should be easy / You just want to love me”), but equally vulnerable, fallible, and at times tragically tender. His songs are lived-in stories. His characters feel like people you know, assuming you know some people who are adjacent to squirrely stuff but still loveable. The artistry on display in clever couplets like "If my halo’s the ring I leave when I pick up my drink / your bible is the best coaster I’ve ever seen" is apparent, whether the songs are ripped from scene drama or created whole cloth from the creative ether.

So that's a pretty long way of saying that The Drew Thomson Foundation is a well-written.

Musically, the output here certainly verges on the more traditional pastoral leanings that singer-songwriter fare traditionally bends towards, but even at its most alt-country the songs have an aggressive feel to them. I'm thinking specifically of "Pace Yourself," a ballad of self-repair on the heels of sustained self-destruction, that only has twinges of country if your sole entrance into music is speed metal. Tunes like “Centerfold” and “Low” come with guitar flourishes that sound born of punk, then shined for something approximating the hardest possible version of The Lemonheads. "Low" specifically sounds like it was written for Single Mothers then slowed-down to fit the less-frantic pace of the record. The false pop-punk nod that opens "L.A. Lately" only gets funnier as the song's echoing, moody chorus kicks in.

The album-opening run of "Karma," "Stay," and "Pace Yourself" set an awfully unfair bar for the rest of the collection to get over. "Karma" is a good table-setter, providing a sort of in-media-res summary of the kind of characters Thomson has brought to life for the last decade; down on their luck, convinced of their own specialness and more than half-way to having you buying it, too. "Stay" is the upbeat song about a loved one dying. Stretch that run to include "A Little More Time," which is the first of a few different love-lorn power-pop songs, and you can see where a perfect EP might have come from. As it stands, The Drew Thomson Foundation is a compelling, tidy summation of where Thomson has been and where he might be going. He's a rascal king; the rare snake-oil salesman with an actual product.

The Bad Reminders: Hits and Misses