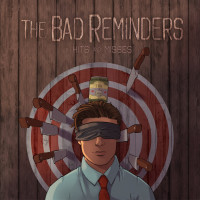 Hailing from New Bedford, Massachusetts, The Bad Reminders have released a well written record that should appeal to most punk rock listeners. With 9 songs, Hits and Misses teeters somewhere between an LP and an EP, but listening to the album straight through warrants more of a full length feel with songs that are reminiscent of Bad Religion, the Vandals, and Teenage Bottlerocket, among others.

One of the most notable characteristics of this album is that the band has the ability to play at varying speeds without sacrificing any melody or too much of a change in sound. The first two tracks, “Learn to Lose” and “Bought and Sold” are mid tempo tunes with high toned guitars and semi-poppy vocals with a touch of grit. But the third song, “Fallen Son” shifts to a speedier ‘90s skate-punk sound, which I believe showcases the band at its strongest. This formula more or less continues for the rest of the album which provides a semblance of continuity without growing tiresome or boring.

Lyrically, the band shifts gears often as well. Though there could be somewhat of a topical theme expressed throughout. These songs are not necessarily written from one character’s point of view, but it could be interpreted that way. And while the narrator seems to be down on his luck at the beginning of the album (“Learn to Lose”), the character appears to overcome this negative outlook by the end (“How Not To Lose”), though there is still somewhat of a pessimistic view on human nature. At times, on songs like “Fallen Son” and “Dissent”, the topics are serious. Other times, the songs are written from a more comical point of view (“Mead Halls”). Either way, the lyrics are a strong point for the band. The songs are well written observations of the world around us, but they also leave a lot of room for interpretation.

My favorite part about writing reviews for Punknews is that I get to listen to albums that I may not have heard otherwise. And it’s even better when the album is awesome. The music is well written and the record is easy to listen to, yet it also provokes some thought from the listener. My favorite moments on Hits and Misses are when the songs remind me of other bands. Despite this though, The Bad Reminders maintain a sound of their own to produce a record that should be very palatable to most punk fans.