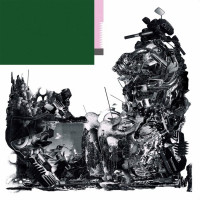 If I were being glib - and if this here fine punk rock and roll news and reviews conglomerate didn't dictate a certain word count on - I'd probably just write "Black midi is proof that every generation gets the Frances the Mute it deserves," collect my cool points and call it a day.

Let us not be so dismissive of black midi's Schlagenheim, a record that many would tag as "post-punk" but contains much grander multitudes than whatever you’re likely thinking of when you see the words “post-punk.” On first pass, there shades of Don Caballero's muscular acid-jazz post-rock ("953"), Led Zeppelin's Tolkien-humping guitar heroism ("Western"), BLK JCKS world-inspired robot rock (“Reggae”, and the Talking Heads indebted giggle-sneer of Ought or, um, the Talking Heads ("Of Schlagenheim"). On second pass, you may be delighted by how these signifiers collide and collapse into each other without a thought. You may also find the all-instruments-at-all-times explosions about as appealing as jump-scares (the annoying-to-type “mbmbmb” comes to mind). These are the kinds of tools one uses when they try to make a record that, seemingly, is about the end of everything.

For my money, the most appealing stuff on Schlagenheim is the most straightforward. The album’s centerpiece is the nearly self-titled track “Of Schlagenheim”, which takes a tender and melodic guitar riff – something so simple it almost sounds like a scale exercise – and explodes it like a big bang into an eight-plus minute tensor grip. The song’s length and its polarity, it’s whiplashing between serene and chaotic, makes good on the epic scope the album spends most of its run time trying to create. Then there is “Near DT, MI,” a brief and horrifying post-hardcore song about the ongoing nightmare in Flint, Michigan’s taps and showerheads. The electronic acidity of the songs closing moments give the here and now a futuristic techno-horror that would feel speculative if it wasn’t already happening.

I suppose the time has come to discuss the lyrics, which … look. The appeal of Schlagenheim is that it makes its case about the state of the world in its textures – in the aggression of its transitions, the cacophony of its arrangement, in the harshness of its punk and jazz and metal and pastoral moments being fucked together into something familiar yet sick, knowable yet eternally broken. That you can only really make out snippets of what is being said works to its advantage. Does “953” work better if you can make out that its an anti-religion screen (I think)? Does just hearing the line “it is a sin / it is a sin” screamed at you do the job well enough? Does seeing the phrase “ she moves with a purpose” make the shocking collapse of “mbmbmb” more meaningful, or is it just window dressing for the real show?

These are questions you’ll have to answer. There’s plenty to suggest that black midi don’t quite have a clear handle on what the world’s problems are, but Schlagenheim’s power isn’t in defining or diagnosing cultural collapse, our collected and accumulated problems. It’s a scream for help, and those don’t usually come with a lot of logic behind them.

Titus Andronicus: Broken Down in Morgantown