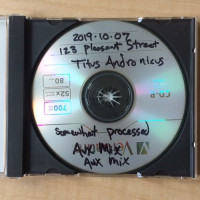 They nail the guitar leads, is the first thing. Titus Andronicus has always been an exercise riff pornography, be it on the tracks from their earlier, more layered days, to the classic rock revival soloing that lifts the most soaring parts of An Obelisk. They've got that part figured out, convincingly and powerfully nailing the solos on tracks like "Troubleman Unlimited," "Tumult Around the World," and "Titus Andronicus Forever." Even on the tracks that don't quite hit one-to-one, like "A More Perfect Union," carry the energy and spirit that's more the point that passing a scale exercise.

Spirit is the name of the game on Broken Down in Morgantown (Full name: Broken Down in Morgan Town:: Titus Andronicus LLC Mixtape Volume IV (An Asterix)), a freebee released the last week of 2019 via the band's Soundcloud page. Whereas the bulk of the band's other mixtapes are studio outtakes, demos and alternate versions of recorded material, Morgantown is a live recording of, per the band's own description, a show with "a single digit audience in a tertiary market...rocking harder than should be allowed by law."

They follow through on the last part. The 13-track recording finds the band in the midst of its 2019 fall tour, sounding well-oiled and comfortable, but not complacent. The bulk of the setlist - and for my money, the stuff that understandably sounds the sharpest - comes from An Obelisk, but the band touches on every release in its catalog, including a rousing rendition of "To Old Friends and New" to open the set.

And now, a few loose observations: The band plays "Tumult Around the World" like it's going to close every show for the next decade, only to throw two more on after it, like some kind of self-encore; One should hesitate to draw and hard-and-fast conclusions about how the band feels about its back catalog based on a Soundcloud drop, but only "Fear and Loathing in Mahwah, NJ" makes it to the live set from The Airing of Grievances; "Troubleman" already sounds like a top 5 Titus track; justice for Local Business comes in the form of a ripping version of "Still Life With Hot Deuce and Silver Platter;" The four-piece band does a fine job of replicating more involved material like “Fatal Flaw” and “Four Score and Seven,” but is still a four-piece band playing stuff that calls for more than four people; the banter alone is worth dropping in on, but especially "New album Out [intrude]."

Let us not speak ill of a free live album from one of the hardest-touring, DIY-forward rock and roll bands working. As a gift for diehards in the waning moments of 2019, Morgantown feels like a promise that Titus Andronicus will never stop going in, at least if there are single-digits of people filling rooms in college towns. As a live record, Morgantown passes the bar of painting a picture of where the band is in this moment; moving forward, bridging a raucous past to a nuanced future. As an enticement to see the band live next time they’re in town, Morgantown makes its case; here are the riffs, and they'll be back soon.