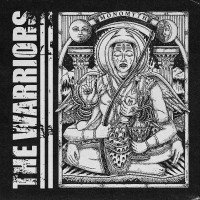 There were a number of ‘comeback’ records from big, heavy bands in 2019. Rammstein, Slipknot, Tool. There were also a fair few from punk bands like Lagwagon (5 years makes it a comeback record for the sake of this piece, ok?) and Bad Religion. The thing that makes these records worthy of note as a collective is that they have, broadly speaking, all been received well by fans and critics alike. In the case of several of the above, I would not have bet on that being the case prior to release date. Oftentimes, bands being on hiatus, experiencing lineup changes, changing creative directions or any one of multiple other reasons for taking a long time to produce a record doesn’t necessarily result in the strongest of outputs. That’s not always the case of course, but to see so may successful returns in a year is a relatively rare occurrence. Which brings me to The Warriors.

8 Years is a long time in any musician’s career. The Beatles entire core catalogue of 13 studio albums were released in 7. But 8 years is how long The Warriors have been away for. I say away, but their influence has never really abated fully. Recently, their music has featured on Marvel’s Daredevil, as well as Far Cry 5 and Steep video games. You also only need look at some of the guest contributors to this record to see the reverence that the wider scene has for the band. Winston McCall from Parkway Drive turns up again, Armand John Anthony and Jarvis Leatherby from Night Demon, Nate Rebolledo of Xibalba, Scott Vogel of Terror, Vinnie Caruana, Daryl Taberski from Snapcase…the list goes on. Such extensive lists of contributors sometimes make me apprehensive as it can result in a more compromised, muddled version of a band or artist’s sound. But I don’t think the various people noted have personally that affect here, but that’s certainly not to say The Warriors sound remains unchanged from 2011’s See How You Are.

So to the record. Well, a lot of it is exactly what I had hoped for. Opener “All Life is One” starts with a few moments of ambience before Marshall Lichtenwaldt comes in with what is an almost acapella, bellowed monologue (over muted drums and gang vocals), showcasing all the fire that you want from him. A winding, high, lead line wends its way under the syncopated, thudding rhythm and we’re off to the races. “The Painful Truth” follows on nicely in much the same vein, but it’s in this song that electronic influences and modern production techniques start to creep in. Synth stabs, glitch vocal effects, compressed drum sounds and occasionally clinically-cleaned guitars do detract from the savagery somewhat, but the delivery and composition still make it feel fittingly hard. There are shades of Backtrack and Ghost Key in the album’s first half, both in terms of vocal style and overall sound, but there is also dynamism that some other hardcore bands have maybe struggled to achieve, so credit where it’s due, The Warriors haven’t rested on their laurels.

The part where things become a little forced and uncomfortable for me is the 3-song run from “Within, Without” to “Tavi Uus Yukwenaak (The Sun is Dying)”. The centrepoint of which being “Fountain of Euth” which sounds entirely like a Bring Me The Horizon off-cut and I can’t say that I mean that in a particularly favourable way, I’m afraid. They throw themselves headlong into modern, pop production territory and it just feels wrong. Again, I do applaud The Warriors for trying new things, but as the record moves out of this section and drops immediately back into the rager that is “Burn from the Lion”, the vast majority of the electro/80’s influences fade away and those 3 tracks feel incredibly disparate and like they’ve just been helicoptered in; dropped into the middle of the record. It’s jarring and not altogether pleasant. ‘Beyond the Human Dimension’ manages to meld the 2 styles a bit better, but then it is only an interlude.

The record finishes strongly as well, so it’s bookended by some of its finer moments – and those finer moments are exhilarating. I just wish there were more of them. Hardcore has produced some successful twists, turns and experiments in 2019, and although I’m stoked that The Warriors are back, I’m not sure that many of their more novel choices on this record are among those successful experiments.