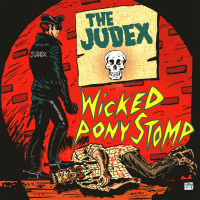 This is a review of The Judex's 2018 single, Wicked Pony Stomp, but it is also a document in praise of the lost act and art of blogging.

Let's do the record first, since that's the reason you're here. Wicked Pony Stomp is rock and roll in the classical sense. You can hear the echoes of 50s proto-rockers like Chuck Berry in its rockabilly, dirty-floor garage rock, you can practically see the pompadours waving and the fish-eye glasses swinging from chains as it bounces on your head. It's as if Judex decided to make good on the youth panic that ensued when Elvis taught our moms how to dance. Don't mistake those flourishes for acts of luddites.

The single's title-track is the most urgent of the three songs, spinning its tale of judgement and justice over a ripping guitar lead and a call-and-response verse structure that makes Judex sound like the house band for The Enchantment Under the Sea dance in hell. The other big revelation here is "Philistine Love," which boasts some honest-to-goodness swing and some of the most inventive and welcome string accompaniment this side of Murder by Death's latest. As a teaser for future work, or a snapshot of what the band could be capable of, Wicked Pony Stomp is an enticing nugget that (hopefully) precedes a full meal of Judex.

Here's the praise: The only reason I know about The Judex is because I happened upon an interview with the Stanky Hampster blog, which is one of a handful of punk and rock blogs still cranking out regular, quality stuff. This, ultimately, is how it is supposed to work; you find some outlets that you like (hey, maybe this one!), you read what band's their covering, you go out and see for yourself what is good.

Spend enough time online in media circles, music or otherwise, and you'll inevitably come across someone bemoaning about the death of the fun internet, and how much worse things are online than they used to be. And, look, some of that is unquestionably true. But the world you want is still out there, in the blog rolls and Feedly readers of the digital underground. Blogs like Stanky Hampster and Some Punk Songs are still putting their noses to the stone, and bands like The Judex are waiting for squares like me, and maybe you, to find them.