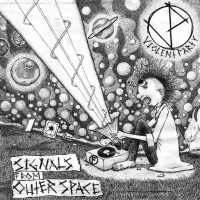 Signals From Outer Space is a real mind-fuck of an album. The don’t use guitars, with one of the only traditional instruments being used being drums. They implement different arrangements of otherworldly sounds that make it feel like attack is eminent on some tracks and that aliens have come down to party with a hardcore punk meets noise sound on others. All of the sounds blend together to create a non-stop, head-spinning alternate universe that once you hear, it will be impossible for you to forget.

Signals From Outer Space opener “Tamasa Tristigma” sounds like an alien radio transmission, complete with static and eerie sounds that transform through static into what sounds like someone chanting. This transitions smoothly into “Second Law” where Violent Party’s unique sound comes to the front and sets the tone for the rest of the tracks. Dissonance is the name of the game with frantic, fevered drumming the only anchoring sound amid laser-esque sounds that bring to mind epic ufo sky battles and garbled, almost guttural vocals that blend together with the noise, making it almost impossible to decipher the lyrics without reading them. This works to their favour as it adds to the overall feeling of the album. You really have to listen figure out what exactly is going on which makes it a unique and fun listening experience.

In Violent Party’s description of Signals From Outer Space they mention the phrase “steganographic signals”. Steganography is when a message or other file is hidden in another message or file. They have achieved this with the delivery of the lyrics. Due to the delivery of the lyrics they are hard to make out and it helps to read along to the lyrics for the song that you are listening to. Then you have to think about the lyrics and what they may mean. Are they singing solely about extraterrestrial life or providing social commentary through the guise of outer space or is it a mixture of the two? That you’ll have to listen and decide for yourself.

Violent Party’s Signals From Outer Space is wholly its own. It is immensely creative and fun while still making you think about what exactly it is that you are listening to. So much goes on in the songs that it can feel a bit overwhelming, but you just have to sit back and enjoy the ride.

Captain Chucke: Until I turn to Dust