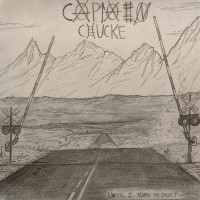 With Spotify finally recognizing Folk Punk as an official genre, I wanted to be sure whatever I next reviewed was found on at least one of the curated Folk Punk playlists, made by the staff of Spotify. As the resident Folk Punk writer, it seemed fitting to celebrate this accomplishment with one of Folk Punk’s rising stars. I had heard of Captain Chucke for sometime, even having some communication with him online, and had casually heard some of his music, but it was this new accomplishment for our genre that pushed me to finally sit down and listen to his December 2019 release from start to finish.

With 20% of this releases profits going to climate change action group, Extinction Rebellion, Chucke fits right in with the global attitude that most Folk Punkers have, in that this world is going down quick, and we need to do whatever we can to fix it (if its not too late). In addition to his attitude, witty lyrics with a more traditional bluegrass sound behind it, fit right in with the sound of most of the records coming out of the scene these days. By track 3 “Moonrise over the Mountain”, you’ll become well accustomed to Chucke’s sound: slightly gritty vocals, a couple strings (generally fiddle and guitar), and no real percussion to speak of.

The musicianship of the crew Chucke has assembled on this record has more than enough talent to put out a great record, but I honestly feel like they fell a bit short on this specific release. I want to be clear that there is nothing wrong with the album, no scarring attempts by the untalented to destroy your eardrums, it just lacked, for me, the soul that keeps me coming back for more with this genre.

There were some hidden gems in the album, but for the most part every song sounded fairly similar to the one before it. The tempo never seemed to change, and aside from differing lyrics, nothing stood out to me as unique from one song to another. The exception being “Climate Change Refugee” where Chucke’s vocals came over a bit more clean, and the combination of fiddle and guitar were tweaked ever so slightly to make a really interesting sound that I had not heard before. Punk, in my opinion, is finding beauty in flaw, and this song had just enough flaw for me to find it absolutely beautiful, rather than the rest of the album that seemed fairly mechanical and formulaic.

I will say that there is a lot of hope for Chucke, even though he may have missed my mark. He has the musical ability to create something very beautiful with his music, and I wish I knew exactly what it would take for him to break through from good to great, but he and his crew will need to find that on their own. Again, there was nothing really bad about this album, but not much that blew me away either. If you’re a fan of the genre, you’ll likely enjoy this album, but it won’t be the best of the year.