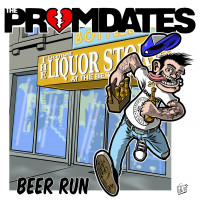 Let’s get this out of the way. Do you like pop punk? Do you like bubblegum? Do you like songs about relationships, beer and horror? What if I told you that there is a new album out by a long running outfit from Norway that infused all that content musically and lyrically? If your interest has been peaked, then please read on.

The Promdates return to the scene with a new full length to wet the whistle of the choosiest of pop punkers worldwide. The title track “Beer Run” kicks things off and properly sets the pace for what is to come. The instant standout for this track as well as the album is the band’s unique ability to work in quick chord changes into the song structures. This makes for a very attention-grabbing listen. “Substitute Teacher” is up next and showcases the Promdates’ love for all things Ramones. In that fashion, the track kicks off with the chorus as the intro. Dual vocal harmonies are infectiously sprinkled throughout the track. The first of many heavier tracks entitled “I Hate You” follows up to break up any monotony sometimes found in bubblegum pop punk. This hard hitting yet melodic track is most reminiscent of genre mentors the Queers with its rapid-fire chord progressions. “Hard to Say Goodbye” would easily be the hit single off this album. This ballad has all the elements of a classic from tempo to backup harmonies. This one might remind folks of the Mopes track with a similar song title. Next is “Single Club” that showcases a clearer vocal pattern. This is a fun track that reminds me most of the Parasites and Dave Parasite’s vocal style. On “Dammit!” the Promdates tackle horror-punk, complete with back-up “whoas” we have all come to know and love. “Treat You Good” showcases backing vocals in all the right places complete with a moving bassline. The band gets heavier again on “Coffee OD” which shows their ability to not be pigeon holed. “Lost My Phone” is a return to a straighter forward Lookout! Records influenced pop punk gem. On “Red Head Girl” the Promdates pay homage to earlier Screeching Weasel, with a straight forward verse-chorus-verse rocker. “Nightmare” brings back the horror element to the album. This track features great guitar leads and backing vocals. Fans of the Lillingtons and Horror Section should take note. The full Ramonescore track “Do You Wanna Watch TV?” follows. The Promdates slow it down 50’s golden oldies style on “Crowley” which reminds of early Riverdales material. The album concludes with “Out Of My Mind” which features strong intro harmonies.

This album has something for all fans of pop-punk, both past and present. This album fully encompasses the adage of if it’s not broke, don’t fix it. The Promdates certainly are not recreating the wheel with this release. They are though incorporating all the genres positive elements which have made for a pleasurable listening experience.

Captain Chucke: Until I turn to Dust