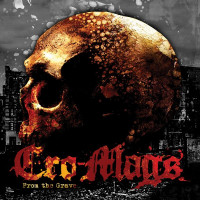 From the Grave further makes the argument that the band is aiming to rebuild their legacy, brick by brick. It’s not secret that despite the landmark status of Age of Quarrel, the band’s recorded history was hit or miss- even Harley Flanagan, who fronts the band now while handling vocals, was critical of some of the band’s releases in his autobiography. So, it was with some trepidation that people greeted the band’s first release in nearly twenty years, Don’t Give In.

The release ripped and certainly did the band justice, so wisely, perhaps following in the stead of OFF!, the band fired off another three song striker. With only three tracks, a release has to make every note count and, to their credit, Harley and crew do just that.

Opening track “From the Grave” follows Harley’s recent mindset. Perhaps where he used to focus on negative aspects, now that he’s through what where probably his darkest days (circa ’15-’17), he’s making it a point to look upward. Now, that’s not to say that the new song is sunshine and rainbows. This is a Harley release, so the tune is fast and violent sounding. But, despite the chaos and metallic discord, Flanagan barks out a hopeful refrain “Don’t give in”! The track has a double importance because it features Motorhead’s own Phil Campbell on guitar. Cro-Mags and Motorhead embarked on a celebrated tour in the 80s, so it’s fitting for that theme to come full circle just as Harley regains control of the band and of his personal life as well. It’s nice that Harley seems happy, and it’s even nicer that happy harley still sounds pretty mean.

“PTSD” follows in the vein of the opening track except that it’s even harder and fiercer and shorter. The band seems to be pushing the style of older tracks like “Show you no mercy” and “Don’t Tread on Me” to the limit. Tipping their hats to Motorhead, the band charges forward at volume 10 and slams as hard as they can. That’s pretty hard mind you,

The biggest surprise is the closing a track, a six minute instrumental called “Between Wars” which coincides with a feature film that Harley is in. The track is haunting, heavy, and even mellow at points. “Between Wars” exemplifies why Cro-Mags were able to originally rise above other bands cut from a similar cloth and why they have risen above. Despite the fact that Cro-mags are known for big, heavy riffs and angry lyrics, there always was more to them than that- “Between Wars” exhibits this depth. Cro-Mags existed before “hardcore” was codified, or was even really a thing, so it’s interesting when the bands play within that framework, and when on tracks like “Between Wars” they disregard those rules. Tellingly, even when Cro-Mags are playing jammy-drone-metal(?), a massive undercurrent simmerss beneath the airy notes.

With a new Cro-Mags album on the horizon, as always, it will be compared to the landmark age of Quarrel. If we use the two recent EPs as guideposts, it seems like Flanagan and gang are playing their hand wisely. The underlying style and message of the band’s newest material flows from the same river as the classic tracks. But, as “Between Wars” shows, the band isn’t interested in doing a carbon copy either. That’s the right play. Harley is known for doing unexpected things, for sure- thankfully, he’s applying that chaos to his music instead of other parts of his life. And, as we all expected all along, that may very well lead to some of his best recordings ever. We’ll just have to wait and see…