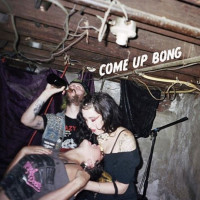 Total Whine’s debut EP is fast, grimy, and loud. On Come Up Bong, the band reaches back to the earliest years of west Coast punk and kick out six cuts that walk the line between nihilism and blind rage. On opening track “Are you talking to me,” drummer/vocalist Miss Mess dismisses the song’s subject with the edge aloofness akin to the biting edge of the Avengers or even Blondie. But whereas, say Debbie Harry exhibited a sort of cool glamour, here, Total Whine make no bones about being little grimy and really whild. Take the EP’s heavy hitter, “Beermosas in the Shower” as an example. The track storms forward in a classic three-chord strike while the band called out “beermosas in the shower”, saluting heavy drinking and good hygiene.

Acknowledging their first wave influence, the band covers mid-west heroes the Pagans with a rowdy take on “What’s this shit called love?” It’s a goody to sum up the band- they’re loud, sloppy (in a good way) and they’re very cynical. But slyly, in that cynicism, they find a sort of self-effecting humor. Come Up Bong is over almost as nearly as it starts, but it’s a surprisingly bright release for a trio that likes to revel in the dark.

*As a side note, the band’s bassist bears the exclusive distinction of being the only person to ever have been bounced from a Punknews show… but we’re not holding that against the group.

Cro-Mags: From the Grave [EP]

The Reaganomics: The Aging Punk