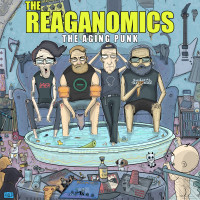 It’s been 8 years since these goofy dad punks released an album, but I’m living in a relative time warp when it comes to The Reaganomics. I only heard 2011’s Lower the Bar about a year and a half ago and I loved it. But I was kind of bummed to see that the band wasn’t really playing much anymore. And then The Aging Punk was announced. So in my world, I got 2 Reaganomic albums within 2 years.

My favorite part about the band is that you know they’re having fun and they’re playing for all the right reasons. I’m not sure if it’s intentional or not, but there doesn’t seem to be a whole lot of promotion involved. It’s pretty much, “hey, listen to our album” or “check out our video”. But that’s pretty damn cool because they let the music speak for itself. Sometimes they get branded as sort of a joke band, but I’m not sure that’s completely accurate. With titles like “Meth Gator” and “Confessions of a Snowflake Lib-Tard”, it makes a little sense. But I think they’re just having fun playing some kick ass punk rock songs.

The album starts with “The Four Cliches” with lines like “if I wanna write a punk song this year, I better start with the generic shit.” Ironically, this record is anything but generic. There’s obviously hints of some cliche punk rock (though very little), but often times this is blended with touches of metal, dueling guitar mountain music, and witty lyrics, among many other sounds. Some of the songs appear to be observations of modern society, while others seem to be more personal and anecdotal. Either way, all of this combines for a truly unique sounding album that makes it really difficult for the listener to decide if the band is serious or not. And that’s a good thing.

If this had been released a little earlier, there’s a good chance that I would have put it in my favorite records of 2019, though I’m not sure exactly what spot it would take. The Aging Punk has a little something for everyone. The album is fun, pointed, and catchy as hell. Fans of the band will definitely dig this one and fans of that Chicago punk sound should also this a listen. It's well worth it.