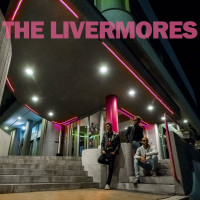 The first time I heard the Livermores, I thought I might be listening to some sort of Manges spin-off, mainly due to some vocal similarities with Andrea Manges. These guys fit right in with so many other Italian Ramones-venerating bands, but stand out from the fray with some absolutely fantastic songs.

Throughout The Livermores, songs sprint past with great economy (no song stretches beyond two and a half minutes) and even greater songcraft. Opener “Copacabana” pretty much sets the tone for the record. Sporting guitar that is kind of reminiscent of Green Day’s “Nice Guys Finish Last” and drums that are just a bit off kilter, the song has hooks for days and a vocal melody that’s to die for. If you dig this first song, you’re going to find a whole lot else here to like.

As the record progresses, The Livermores offer up more and more to like. Some stuff sticks with pure pop punk goodness. “I Love Her (She Don’t Care)” and “The Reunion” each have earworm choruses with vocal and guitar hooks galore. “P.P. Is A Spy” could fit nicely alongside a Lillingtons spy thriller romp. “P.P” actually kind of bothered me at first. Near the end of each line, the vocals shoot up and it threw me off. But now it’s grown on me and I might even dare to call the quirk endearing. And the chorus is endlessly catchy in its simplicity and singalong nature.

But maybe my favorite stuff on the record happens when they toss a bit of a surf vibe into the mix. “Bay California” is a terrific song that’s about as close to mid-tempo as The Livermores get. It’s got a really cool surfy guitar riff and some fantastic harmonizing backing vocals. And with a double-tapped snare, the chorus is bouncy and super catchy. Pretty much the same holds true for “Summer 16”, another song with a bit of a surfer edge and some chiming guitars. This one has a sort of nostalgic “First Day of Summer” feel to it. And both of these pay homage to Ramones with singalong declarations between verses (“second verse, same as the first”-style). But I think my favorite song on the record has to be “Easter Island H.E.A.D.”. This is another driving fast song with some chiming and surfy guitar bits backing some of the most ridiculously catchy and melodic vocal hooks of the year.

So that’s a lot of good. However, there are a couple of songs that never really leave a mark. “G.K. Commando” and “C.I.A.” aren’t bad, they’re just not memorable. “Who Killed F.P.?” pays homage to “Rock and Roll Radio” with a broadcast announcer phoning in, but the song feels a little darker and a little more lethargic than most of the rest and they toy around with a Halloween organ that never lands. All of this is alright, it’s just not up to snuff with the rest of the stuff on here.

The Livermores have a lot of good going for them. Holding tight to Ramones and fitting in well with quality punk like Manges and Lillingtons, The Livermores prove these guys to be a band worth following.

Signs of the Swarm: Vital Deprivation