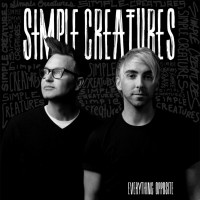 Blink 182's Mark Hoppus and All Time Low's Alex Gaskarth moved their collaborative group quickly in 2019, releasing a sister follow-up to their debut EP with the Everything Opposite EP. Much like the Strange Love EP, released earlier in the same year, Simple Creatures continues to hone in on their own blend of self described "trash-pop."

"Special" falls immediately into a moog buzz married with predictable, yet infectious, vocal pyramids from Hoppus. Gaskarth dives into the bigger portions of the verse before taking over the drive of the chorus. This theme rolls into "One Little Lie," and while Mark Hoppus is singing yet another melody seemingly borrowed from Blink or Plus 44, the engineered instrumentation, and the All Time Low vocalist's timbre and range carry the songs delightfully.

"Need Me" trades the energy for long winded vocals, slower tempos, and some acoustic guitar, opening the release up for the spastic techno intros in "The Wolf." The two and a half minute anthem is sprinkled with the same fuzzes, industrial guitars, and clever vocal post-production that has given the duo an opportunity to explicitly declare the band's sound in just two short EPs.

"NVM" and "Thanks, I Hate It" dip into the most selfish pop chart reaches of the Simple Creatures discography thus far, but sew up the the 18 minute record nicely. Everything Opposite isn't at all opposite from the debut EP, and maybe it isn't quite as complete as the first effort, perhaps they could have just released all twelve as a full length, but it is indeed great, and worthy of attention. Hoppus and Gaskarth successfully released twelve songs in one year under a moniker much different from their 9-to-5's, and some may say that the unapologetic pop genre is where these two should keep their focus on.