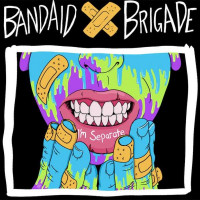 Like the theme from a long-lost sitcom from the mid-80's, “Travel Light” jumps out with an infectious synth intro, disco beats, chiming crystals and a stupid catchy chorus. This song sums up the two leads of Bandaid Brigade. The boys don’t take themselves too seriously but are very serious about their craft and they can back that up with some solid talent.

Brian Wahlstrom (Scorpios, Gods of Mount Olympus) and Zach Quinn (PEARS) toured under the One Week Records banner where they began to jam. Once bringing drummer Paul Rucker (Armchair Martian) into the fold to lay down drums, things just clicked as far as sound goes.

Glorious yacht rock, punk rock and 90’s alternative, this record is not something you'd expect from the pedigree involved. It's fun and dance able at times but with introspective lyrics strewn throughout showing that this was a serious and cathartic process after some hardships in the lives of the leaders of this band.

Much has been said about the penchant these guys have for writing 80's drenched tunes but kick off track "Everything" and "Attila" make a good case for the bands love of mid 90's alt-rock. Where these boys really excel is when they mine the 80's. "Holding Steady" has a marvelous sax breakdown that shouldn't work but here we are. In fact, all the songs have that something extra, something that pushes it over the edge. "Stay Busy" is a somber song through 2/3rds of its run time but when it breaks into a funky groove on the last third is where it propels the song from run of the mill to something special. The more pop rock “Treat Me Like A Christmas Tree” gets an epic ending with a melancholy piano bit and a thunderous guitar solo. "Break The Grid" is another synth driven gem that leans heavily on the 80's sounds. This just shouldn't work in 2020 but goddammit it does. So many of these songs are ridiculous ear worms.

Zach and Brian clearly have a bromance that’s morphed into this batch of songs. Songs that they’ve been sitting on for the better part of 2019. It’s got to feel pretty good getting their eclectic slice of music out into the world. This may not be everyone's bag but Bandaid Brigade have accomplished something pretty special with “I’m Separate”.

Bring on the synths!

Simple Creatures: Everything Opposite