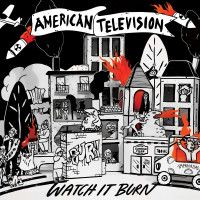 Whenever American Television comes to mind, I always remember "Optimist"... it's my favourite jam from them and something that always reminds me of RVIVR's "Paper Thin" -- another banger I could listen to all day long. What's most interesting is American Television aren't that band that's usually top of mind when it comes to my particular taste in pop-punk but as Watch It Burn goes on to reiterate, this is something that drastically needs to change.

Off the cuff, I love how this record feels way more aggressive yet maintaining the catchy aura of old. Songs like "Awkward Universe" and "Standing Still" have that infectious energy of bands like Red City Radio and another modern favourite of mine in The Penske File. It's all about bouncy, melodic hooks and thick, jammy basslines with shoutalong choruses. Millencolin's another act that pops to mind based on "Parasite" which I'd say is one of the band's most cynical songs.

Overall, the "it" in the album title does come off as if it's referring to life at the moment because of the world we live in -- one where politics keeps driving poverty -- and it's nice to see them taking a stab at these messages. Of course, you've got the Americana vibe in tracks like "Drinks" but I could appreciate when thematically, things get more serious as they wax on about corruption and corporations.

I'll admit though the album does feel a bit front-loaded with too many songs on the back end bleeding into each other with some redundancy but all is forgiven by the time "Great Divide" closes out proceedings. I love how it ramps the record up and leaves you wanting more of a band that honestly doesn't get enough credit. That's on me as well as I should be listening to them way more frequently. This new set of jams is a perfect reason why and I can't wait to see them go from strength to strength because we definitely need more of American Television making this kind of poignant and pertinent music in the punk realm today.