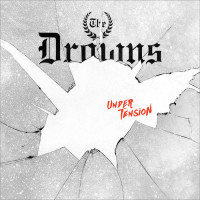 Well, somebody had to put out the first great punk record of 2020. I would argue that it was Seattle’s The Drowns back on January 17th. Under Tension set the bar high, less than three weeks into the new year. The songs are so catchy that they’ll still be stuck in your head when December finally rolls around. I missed the boat on The Drowns 2018 debut View From the Bottom, but gladly jumped aboard for last year’s The Sound. These former members of The Shell Corporation, Success, Time Again and The Briggs seem to be on a musical mission.

The second Drowns full length finds them treading over familiar ground, but honestly, they do it so damn well that you won’t even care. This time around, the band enlisted the services of producer Ted Hutt, who has worked with heavy hitters like Dropkick Murphys, Gaslight Anthem, Flogging Molly and Street Dogs, so Under Tension sounds great. For those unfamiliar with The Drowns, those bands are also pretty good reference points.

I must admit to not really being familiar with the individual members of The Drowns, but there are clearly two main singers. One has a lower, raspier voice, think Al Barr or Chuck Reagan, and sings the majority of the songs. The other has more of nasally, classic punk voice, like Jake Burns or Pete Shelley. Both have their charms, and the variety helps keep things interesting. Under Tension has 10 new original songs and a cover of the Jimmy Cliff reggae classic “Harder They Come”. For me, the highlights are “Black Lung”, “Them Rats”, “Wolves on the Throne”, “Hold Fast”, “Demons” and “Battery Street”.

That said, the cool thing about Under Tension is that it’s good enough that you’ll want to listen front to back. There are no clunkers. Even a trope like “One More Pint’ will have you singing along. Another cool thing about the record, and The Drowns in general, is that they should appeal to multiple generations of punks. Old geezers like me appreciate the orthodox punk sounds, and the kids should be able to relate to the modern sincerity and message. Do yourself a favor, and don’t miss out on the first great punk record of 2020.

Eminem: Music to Be Murdered By

Rejection Pact: Threats of the World