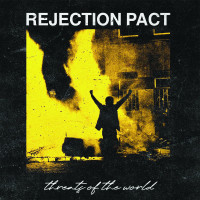 Rejection Pact’s Threats of the World is the band’s first formal release, and offers ten fast-paced songs packed into a single 7”. That alone should give you a sense of the speed at which the songs are played. Rejection Pact bring a blistering pace to their brand of hardcore punk on their debut for Safe Inside Records.

With the longest song on the record clocking in at a whopping one minute and thirty seven seconds, Rejection Pact certainly subscribe to the “loud, fast rules” ethos. The third track, “We Will Never Forgive You,” is one of the strongest on the release and captures the band at their best. Quick moving verses segue into a drum-heavy bridge and thudding breakdown, and then the song is over. The vocals here are gritty but not to the point of indecipherable screaming. Rather they offer a sense of anger and energy without losing clarity. The lyrical content is the most pedestrian aspect of the song, covering the very typical ‘fake friend’ theme we’ve all heard before. But the drumming on the second half of the song is more than enough to carry the listener through here.


“Nothing Man” opens with an eerie bassline that moves the song into an equally disquieting guitar riff, setting the tone for a discordant track overall. The guitar writing on this track is some of the best on the record, moving between a horse-hopping style and a darker, chunkier vibe. Lyrically, the song is a bit more insightful as well as it tackles the nature of power and politics in our country. Greg from Trial’s cameo is not only apt here, but it’s also recorded in such a way as to elevate the already disquieting tone of the track.


The best and most innovative song on Threats of the World is the record’s closer, “We All Lose.” The song is much groovier from the start, drawing on guitar stylings reminiscent of Modern Life is War or The Suicide File. The song crescendos into a closing breakdown that manages to incorporate a piano track that is neither forced nor cheesy. The piano sits just far enough in the background of the song that it becomes a great complement to the other musical aspects therein. The rhetorical questions offered in the lyrics are also elevate the song, bringing into a focus a very introspective and reflective tone. The vocals shine here as well, really honing the singer’s ability to sound angry and earnest without losing precision or coming off as cheesy. “We All Lose” works great as a closer to the record.

What Rejection Pact have going on here is at once comfortingly traditional and compellingly ingenuitive. They blend the foundational elements of hardcore punk with some modern and decidedly hardcore riffage to craft an impressive debut EP. That they squeeze ten songs onto one 7” should not be lost here either. That’s impressive and not much at all is lost in the song-writing despite the brevity of the individual tracks. Threats of the World is absolutely worth checking out for those of us that enjoy hardcore with punk appeal and vice-versa.

The Drowns: Under Tension