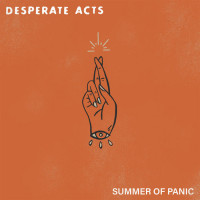 Summer of Panic is Desperate Acts’s third release in just over a year. The previous two releases were both two-song demos, so we’re not talking anything terribly prolific here. But the point is, the band seems very focused on developing and honing their sound. As a four-song EP, Summer of Panic certainly pulls its weight offering well-written and mature punk rock with the melodic sensibilities many of us have come to love from the Gainesville, Fl. scene.

The driving melodic guitar riffs in “Medic,” the EP’s second song, present the listener with simple yet clever writing. The guitar leads that complement the vocal choruses are similarly well-written and bring out a really impressive sound overall. Vocally, there is just the right amount of range going on in the song. The verse vocals aren’t doubled up which makes for a good contrast to those in the choruses, which are subtly infectious. What does come through is really strong vocal patterns that remind me of Jawbreaker or Hot Water Music. There’s clearly a sense of intonation and harmonizing without coming off as particularly polished or subdued.

The EP’s title track and closer is a wonderful example of the band’s musical ability. Employing really layered guitars, thudding drum tracks, and great song structure, “Summer of Panic” is a great closer for the EP. The octave guitars laid over the vocals in the second half of the song are perfectly complemented by the tom-heavy drumming there. The song rocks along with all the power of a set of musicians who know what a good song needs, and what becomes superfluous.

What the listener gets on Summer of Panic is cohesive and well-written punk songs that have a vibe of more mainstream rock without losing any credibility. The EP is extremely well-recorded given that it’s self-released. I mean, it’s worth mentioning that the members of Desperate Acts have played in Holding On, Comeback Kid, and Martyr AD, among others. But that only matters to the extent that they know how to write with structure and clarity. Desperate Acts is clearly a band apart from its members’ former endeavors, and I love that. Give this EP plenty of spins on the Desperate Acts bandcamp as it’s one of the best EPs you probably didn’t know came out last year.

Rejection Pact: Threats of the World