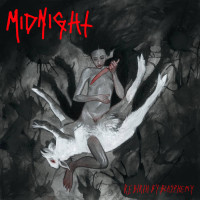 If you follow any form of extreme metal, then Midnight have been on your radar for years now. This Ohio outfit is the mastermind of Athenar who single-handedly writes and records the band’s studio efforts. Midnight has signed on with Metal Blade Records for REBIRTH BY BLASPHEMY which makes for the outfit’s 4th studio album. For those unaware, Midnight churns out raw blackened and punkish Satanic speed metal, musically not unlike Venom, Slayer, Motorhead, or Discharge, amongst others. This amazing album continues in the vein of what one would expect.

The album’s opener “Fucking Speed and Darkness” lyrically and musically defines the whole band’s existence. Raw vocals are spewed over cleverly patterned chord changes in this catchy opener. The title track “Rebirth by Blasphemy” follows with steady traditional meets NWOBHM riffage that carries on like a jackhammer. One of the album’s standout tracks “Escape the Grave” follows. This track boasts Thin Lizzy styled guitar leads over tasty speed metal instrumentation. Lyrically this song is an anthem for letting evil lead you from reaching an early demise. “Devil’s Excrement” is another classic short but raw blast of perfection. Athenar slows things down on “Rising Scum” which makes for one of the most ambitious tracks on the album. Hellacious fury is unleashed in a slow-down doom-laden fashion to haunting results. The heavily Venom influenced “Warning from The Reaper” follows, which showcases Athenar challenging his inner Cronos to positive results. This mid-tempo traditional metal rocker boasts solid guitar solos and leads. “Cursed Possessions” opens with a Maiden-like noodly guitar intro. Haunting vocals overlay a galloping bassline and steady guitar lead. “Raw Attack” is exactly just that. This track could have been pulled off BOMBER or ACE OF SPADES. Solid backing vocals complement Athenar’s evil grit. This track boasts the best lead guitar work on the album as well. Ironically, the track “The Sounds of Hell” comes off as the most “accessible” track on the album. This very steady hard rocker showcases a 4/4 drum beat along with a moving bassline. The album’s final track “You Can Drag Me Through Fire” easily could have been an 80’s metal hit. The solid intro and tempo and solid backing vocals in the chorus hold up well against any mainstream metal tracks from the Headbanger’s Ball. This closing track is the perfect final chapter in this well-rounded album.

Midnight continue to carry the torch for extreme metal with this release. While Athenar didn’t reinvent the wheel with REBIRTH BY BLASPHEMY, he helped to firmly solidify Midnight as one of America’s extreme metal acts. Their live show is something of legends as well. This album is an extremely cohesive album and flows very well. This release will certainly capture the attention of existing fans as well earn new converts along the way.