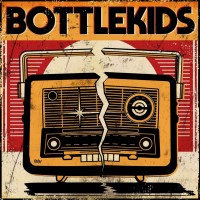 Though they are in their infant years as a band, the Welsh trio Bottlekids, seems to be gaining steam with the re-release of their self titled EP. Compared to full albums, EPs are somewhat difficult to rate and review because they are categorized on a different standard mainly because of the amount of tracks. Despite this though, the 4 songs on this release are killer tunes that not only stand out as solid songs, but also give the listener a glimpse of what will hopefully be a future LP.

Sonically, the record isn’t necessarily easy to define because there are elements from various eras of punk rock. Most of the time, the songs maintain a gritty, pop-punk sound (“25 Days” is a pretty good example of this), but other elements are often peppered in. At times, the songs have a bit of Clash influence, right down to the semi-reggae rhythms in “Smoke, Let’s Go” and occasionally in “The Wayside”. Other times, there seems to be somewhat of a ‘90s grunge sound, like on the opening of “Dark Times”, though that subsides when that same progression is used during the chorus, making it catchy and more melodic.

Being a trio is presumably difficult, especially when playing live. But these 4 songs are structured as not to sacrifice any energy. The tracks are filled with ‘90s styled jumps, atypical chord progressions, rolling fills, energy packed interludes, and a whole lot of breaks. All of this causes a feeling of anticipation that is eventually alleviated before the end of the songs. As a result, Bottlekids offer up a fresh take on some classic punk rock. They’ve caught my attention and I’m interested in what comes next for these guys.

Poppy: I Disagree
Go to the review index