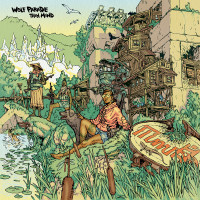 Montreal's Wolf Parade are another act I feel don't get as much attention on the indie-pop scene, especially with their unique style of synth and prog, which feels like The Bravery meets AFI meets Tiger Army at times. Throw in Spencer Krug and his Morrissey-like presence really makes the band -- whom I honestly consider veterans -- tick. It's something brought out on 2018's Cry Cry Cry especially, which admittedly has aged better for me over the last couple years. Come Thin Mind, the band attacks the digital age and human consciousness, especially those getting lost in the muck and mire, and while it's not their most solid musical outing to date, I'd say it's still worth the go. And again, a record I think will grow.

It took eight years for the last album to drop and it's interesting to see a big shift again with the initial power trio of Dan Broeckner (guitars), Krug (keyboards/vox) and drummer Arlen Thompson losing multi-instrumentalist, Dante DeCarlo, amicably after the last album. And you do feel that loss, at least in the back half of the album where it ends up being a bit too slow and boring in terms of rock and roll for me. The edge and fizz of the psychedelic sound is where I feel WP shines most and that goes away early on after sprawling choruses, aggressive synth and pop-heavy bass-lines on the first three songs: "Under Glass", "Julia, Take Your Man Home" and "Forest Green".

They got this record off to a banger, something I hoped for, outdoing to slow Vampire Weekend vibe they give off some time. But then, as soon as I think it isn't going that boring direction, boom...

"Out of Control" is a prime example of this drag, and it just doesn't work. I do like how there are bits of Young Jesus here and there allowing Krug to shine on the mic but even with "Fall Into The Future" and the Daft Punk-like "Against The Day" it isn't as snappy as I know WP can be. Now, when I say boring, I don't mean unlistenable, but compared to the catchy essence and frenetic pace of the tracks I love, the contrast just feels so off.

The last album did it a bit better but this one isn't as balanced. That said, the slow tracks are a lot better than I'm probably giving them credit for, it's just the amped-up ones are a strength I feel the band should play to a LOT MORE. That said, dive in. It's another gem and hey, with an album cover that good, you know there's something special on the inside.