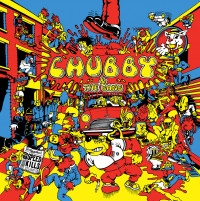 Chubby and the Gang

The first track on this, the debut album from London’s Chubby and the Gang, is called “Chubby and the Gang Rule Ok?”. It’s a big claim, but in this case it’s an accurate one. This is a brilliant, energetic, incredibly fun record, and I’m sure it will be in many “Best of 2020” lists. Fun. You remember fun don’t you? It’s what we used to have before the po-faced, punk rock police gave us rules and made us all miserable.

Chubby and the Gang are an English band, (London more accurately), and their British influences are evident throughout. It’s a heady mix of the Damned, UK82, oi! and hardcore, all jumbled together in one joyous, tasty soup. Twelve songs, 26 minutes, so its easily digestible in a single sitting too.

The band is led by “Chubby” Charlie Manning-Walker, and emerges from the ashes of previous British hardcore bands. Charlies himself was most famously in Violent Reaction as well as Arms Race, and the other members were in Brighton’s Gutter Knife. But this is far more than a straight-ahead hardcore album. Like I said, various brit punk influences are evident throughout. The first song has a touch of the Damned, the title track “Speed Kills” gives a nod to Motorhead. “Pariah Radio” may put you in mind of the UK Subs, and “All Along the Uxbridge Road” has more than a touch of Cockney Rejects to it.

That’s one of the things that I most enjoy about this album: no two songs are alike. So many modern punk albums sound like one long song: the songs all blend into eachother because they are all the same pace, same instrumentation and same structure. But not this one. Here we might get a straight up hardcore song, followed by a street punk singalong, followed by something that could have come out of 1959! That particular song is called “Trouble” and is one of my favorite songs on the album, and it’s a love song complete with twinkly Hammond organ! Imagine that! A love song on a hardcore record! But with so many different influences does it hold together as a unified whole? Oh yes! Overall it’s the driving rhythm section that ties the whole thing together, keeping a ferocious beat, and as Jimmie Snow reminds us in the voiceover at the beginning, “it’s the beat, the beat the beat” that gets us going. It was true in 1954 and it’s still true today.

The album is produced by Fucked Up’s Jonah Falco. On the band’s Bandcamp page he describes it thusly: “Wall to wall speedy punk bordering on the recklessness of Motorhead, the single mindedness of the Kids, the streetwise panache of Cockney Rejects, and the occasional curveball pasted in to keep us all surprised. This LP is timeless vernacular perfection peppered with misleadingly obvious displays of brashness aching their way into the hallways of surprising musical channels…it will all have you reaching for your London A to Z and trying your hardest not to spill your pint.” Very true.

I only have a couple of issues with the album: the cover and the final song. The cover is a colorful cartoon featuring all kinds of wacky characters, looking not unlike an R. Crumb cartoon. It makes the record look childish and silly to me, but others love it, so I guess it’s a “horses for courses” thing. The other thing I don’t like is the last song. It’s a simple solo acoustic track called “Grenfell Forever”, and I assume it’s dedicated to the victims of the awful Grenfell Tower fire tragedy of last year. But instead of being a touching tribute, it comes across as somebody doing drunken Billy Bragg karaoke. And heaven knows we don’t need another Billy Bragg: one is more than enough thank you! But of course its heart is in the right place so I can’t be too critical.

It’s a phenomenal debut album. Don’t overlook this one.