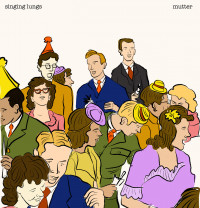 When I was a kid, I had a pretty impressive collection of cassettes, mostly hair metal. I’ve been given a few in more recent years, but I haven’t actually purchased one since 1987. The last tape player in the Trauma household went to the scrap yard earlier this month in my college aged daughter’s 2001 Buick Century. So what’s the point of all this rambling? It’s simply to say that I haven’t bought into the recent cassette revival.

BUT, if I were going to listen to a tape, it would be the new EP from Michigan’s Singing Lungs. Mutter is available on cassette and digitally from Count Your Lucky Stars Records. For you emo kids keeping track at home, the label is run by Empire! Empire! (I Was a Lonely Estate) leader Keith Latinen. Mutter follows Singing Lungs’ self released 2018 full length Groan, which is available digitally, on cassette, AND on CD. (I WILL buy into the CD revival.) Despite the physical challenges of actually playing it, I found Mutter to be an enjoyable listen.

Unlike my amazing ‘80s tape collection, Singing Lungs’ sound is firmly rooted in the ‘90s. It hits the sweet spot between classic EpiFat and second wave grunge. The vocals are gruff, and the songwriting is solid and catchy. The drumming is provided by Ben Graham, formerly of Lansing’s Cheap Girls. “Time Well Spent” starts things off on a high note. In a truly meta moment, the second song is called “Demo Tape”. It’s got a real ‘90s alt-rock feel, and doesn’t seem to have anything at all to do with outdated audio formats.

Much of Groan was about domestic tranquility, and “Leave The Lights On” is in a similar vein. Much of Mutter appears to be centered around fondly reminiscing about being young and playing music, something many of us can relate to. “The Kids I Used To Know” and “I Don’t Remember Much” seem to explore two different side of that same coin. The five songs work well together, and with a 14 minute run time, it’s longer than any of my favorite cassingles. The bottom line? Tapes are obsolete, but Singing Lungs and Mutter most certainly are not.

Chubby and the Gang: Speed Kills