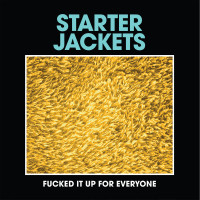 I generally enjoy my punk rock with a healthy dose of grit and grime, so I wasn’t quite sure if the new EP from Starter Jackets would be something I’d like. But, after a few listens, my opinion had changed. There’s something endearing about these four songs. The Illinois band, comprised of members of The Copyrights and Local Drags (among other bands), has produced a record that sounds simple upon first listen, but carries a bit more depth underneath the surface. Consequently, this is a fun little record that is easy to enjoy.

Lead vocalists Luke McNeill and Lanny Durbin each wrote two songs for the record and consequently, you get a little bit of variety without sacrificing any fluidity. Durbin’s tunes (“Bad Application” and “Foreign Bodies”) have a power pop/garage feel laced with big choruses, with lyrics that are easy to sing along to. In both cases, the songs are well structured with the verses serving as a vehicle to get to the best parts of the song. “Foreign Bodies” is designed slightly differently though. The song opens with a subdued, shortened chorus, which immediately sucks the listener in, causing a sense of anxiety before ultimately reaching the full chorus. On the contrary, McNeill’s tracks tend to lean more towards pop-punk or classic punk, though the songs have a similar feel and tone. “Around It”, with it’s repeating lines, and verses that are built like choruses, should sound the most familiar to fans of The Copyrights. And “Dark Days” is just as catchy and aggressive right off the bat.

If their goal was to write a fun, quick-hitter with big hooks, then they’ve accomplished that. This is my first time listening to Starter Jackets and I wasn’t quite sure how the two writing styles would blend together. But that doesn’t seem to be a problem here. All four songs have an appealing unique quality, yet the tracks maintain an overall semblance of continuity. As a result, I’ve found myself whistling these melodies often over the last few days.