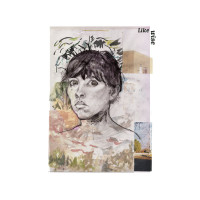 On “Rare Thing,” Frances Quinlan confesses “I only managed to stay small / By making giants out of strangers.” It’s a statement illuminating Quinlan’s artistic approach to her music. Having started Hop Along as a solo project, Quinlan’s new album Likewise is both a return to form, with the singer stating that acoustic skeletons of Hop Along songs were somewhat the inspiration behind this release, and a leap forward through a softer exploration of orchestral pop songs. From the artwork, to the compositions, to the narrative stories on Likewise, this album is a reflection of the lyric Quinlan delivers ahead of the aforementioned confession, “I know there is a love / That doesn’t have to do / With taking something from somebody.”

Likewise eschews the traditional indie rock of Hop Along for studio experimentation leaning on soft electronics, acoustic guitars, and skittish percussion. It’s hard to state this album falls into one genre or another, other than indie, because aurally it covers a lot of space. “Detroit Lake” plays with studio fades that would bridge the divide between Animal Collective and The Beach Boys. It’s impossible not to see shades of the avant garde indie Hop Along traffic, but that might be due to the unique delivery of Quinlan more so than the compositions. This is best demonstrated in the closing of “Went to LA.” Björk might be the closest reference for Likewise which Quinlan has cited as an inspiration for the album. That comparison rings true with “Now That I’m Back.”

Much like the music, there’s also little in the way of connected threads in the lyrics. This could be partly because the time span these songs were written during. Some harken back to 2013 while two songs come from the Hop Along’s Bark Your Head Off, Dog sessions in 2018. Quinlan tells stories that bring elements of literature combined with scenes from life while embodying a wide variety of strangers and characters mining their stories for details. While some of this can be hard to follow, it’s impossible to miss the cutting lines Quinlan drops throughout these narratives. On “Detroit Lake,” it’s the “You were mid sentence / When I had to interrupt you / In order to relate.” And while Voltaire’s severed head might not seem relatable, the preceding “No presence / Save for memories spiraled / And bent in your bedroom” brings it into context.

It would be correct to say that Likewise is a somewhat experimental debut solo effort from Quinlan, but the reality of the album is it’s the most pure reflection of Quinlan’s art. It traverses a wide array of sounds and lyrics that don’t come together completely, but are wrapped up tightly enough by the artist’s cohesive vision.