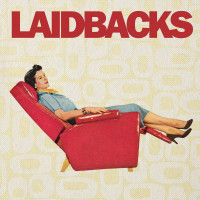 Anyone paying attention knows that there has been a massive resurgence of 90s Lookout Records-style pop punk. Bands from across the globe this year have released critically acclaimed releases. Many labels have also chosen to reissue various classic 90s releases as well. Many of the classic pop punk labels such as Lookout Records and Mutant Pop may cease to exist, but newer labels keep popping up to keep the flame burning. Hey Pizza! Records from Wisconsin is one of those labels. Their latest offering comes in the way of the debut S/T CD by Midwest band the Laidbacks.

“Fun Tonight” kicks off the album with a very recognizable sound to pop punk fans. Solid riffage is overlaid by some catchy keyboards. This soon follows by singer Jody Havenot’s nasally vocals and solid back ups. Though not a Riverdales cover, this track would fit in their discography. “Always There” is a standard 90s Lookout Records sounding track. The highlight of this track comes in the form of the very Jughead from Screeching Weasel influenced guitar intro which sets the pace. The Laidbacks kick it up a notch on “Overdosed” which is a fast-paced rocker. The guitars take on more of a garage tone on this track. The album’s tempo slows down for the very Ramones-like “I’m Always Right.” The band’s songwriting ability shines through and features a very effective chord change at the end. A solid bassline is present underneath tasty guitar leads on “Marry Wanna Dance With Me.” Don’t worry. The title’s play on words took me a minute as well. “Believe” would be the album’s Dee Dee Ramone track. The Laidbacks take influence from early Queers and the Angry Samoans here. “Never Look Back” helps balance the scale on this Parasites-like mid-tempo track. The back up vocals are extremely effective in the chorus. This track features another catchy bridge that leads to the outro. “Forever Whatever” is the standout track on this debut. This would be the track that effectively sums up all of what this band has to offer. This true Ramonescore effort pays homage most to Euro bands such as the Manges or Apers. Clever rhyming makes for a killer chorus. The drumming is totally four on the floor on “I Want You To Know” which ultimately leads to “Miss Everything” as the albums’ closing track.

The Laidbacks certainly wear their influences on their sleeves. This debut album will take you straight back to the golden era of pop punk. Though no new ground is being broke, this is certainly more ambitious than a retro throw back. This is an honest homage to their predecessors and heroes. I eagerly look forward to what the Laidbacks bring next.