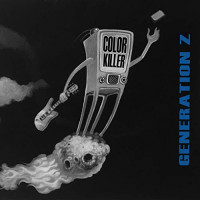 Color Killer is kind of remarkable. They’re a bunch of kids, quite literally. A bunch of pre-teen to early teenage kids, Color Killer plays a catchy brand of pop punk with lots of reverence for bands that revered the Ramones. On Generation Z, Color Killer offer up a quality debut full-length that leaves me wishing I had my act together like this when I was their age.

The first thing that really registered with me while listening to this was the quality. These kids are writing some great stuff. While the lyrics are mostly innocent, simple, and fun, I was kind of taken aback at how well some of this stuff taps into some primal angst and realness. Even more so, the song structures show a true grasp of where they’ve come from, with well composed introductions, verses, choruses, and bridges. And the playing is really solid. Sure, this kind of music is fairly simplistic. But the only real tell that this is being made by kids a bit younger than usual are the vocals.

On Generation Z, Color Killer puts together a mostly great set of songs. They go for a live feel right off the bat, opening with a few seconds of feedback before “A.D.D.” breaks out into a breakneck stop-and-go thing and finally settling into catchy mid-tempo pop punk territory. “Down With Winter” is an attention grabber (especially during a midwestern winter), and its charming cascading vocal line during the chorus is sure to win over doubters. The best set of songs falls on the second half, with “Toothless Wonder”, “Go To Bed”, and “Generation Z” almost falling over themselves to take the cake for best hooks and catchiest melodies on the record (the answer is “Toothless Wonder”, by the way). This stretch ends with “Michael Doesn’t Like Me”, a super quick take on bullies and friend-making struggles that has maybe my favorite chord progression on the record. Yet another great one on a growing list.

So yea, Color Killer really impresses on Generation Z. Near the end, the song “Maci” does the obligatory acoustic thing. I’m not a big fan of this idea that pop punk records need to put an acoustic song somewhere. But this one’s not all that bad. In fact, I kind of smiled a bit at the line “Oh Maci / I’m so sorry / I bit you on the lip”. Still, I could’ve done without. Same goes for the “hidden” song tacked onto closer “I Just Wanna”. But these are minor complaints indeed.

Color Killer’s Generation Z is worth checking out. They’ve got good things going and seem ready to take on the world. I’m thinking maybe a split with Milo’s Human Robots (son of Ray Carlisle of Teenage Bottlerocket) would be a fun idea. Also, I hear they’re fun live.

¡No Accion!: Lights Out