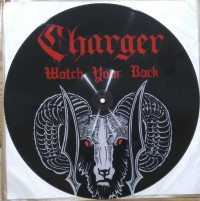 Pirate’s Press Records have been very open about the fact that the company’s main business is pressing records for other labels. Some of the stuff actually released by PP is to showcase all the cool things they’re capable of making. (That’s not to question the bands they release, because the vast majority of them are great.) Case in point, the new Charger single, “Watch Your Back”. For years, the sound quality of picture discs was questionable at best. Pirate’s Press Records seems to have improved the process so much that there’s no longer an audible difference. (More on this later.)

For the few who still don’t know, Charger is a relatively new Rancid side project. The trio features Matt Freeman on bass and vocals, and takes many of their musical cues from Motörhead. The band released their excellent seven song debut in 2019. (It wasn’t entirely clear if it was intended as an EP or LP.) “Watch Your Back” is in a similar vein, and definitely worth a listen. The record itself might be the star, but the song is really solid and could easily stand on its own. It’s driving punk/metal with a catchy chorus and raspy sung/shouted vocals.

The “Watch Your Back” 12-inch single was created by something called digital UV printing. It’s not a true picture disc, and is made of real vinyl. The front features the stark, white image of the Charger logo on black vinyl with the words in red. The back is full colored and includes all the information you’d typically get in an insert. The biggest downside is that it’s only one song. Charger fans (and obsessive Rancid completists) are definitely going to want this. (In case you’re wondering, no, this is not the 1983 Cock Sparrer classic.) The only real question will be if they want to keep it on the shelf or hang it on the wall.

¡No Accion!: Lights Out

Yuppie: A Place To Call My Own