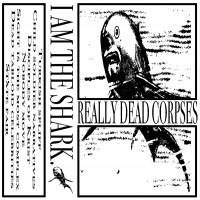 It’s unfair, I think, to take anything Really Dead Corpses is doing on it’s debut EP, I am the Shark, too seriously. It functions less as a collection of songs that hang together and more as a sampler platter of potential styles. Put it less charitably (and maybe more accurately): it’s sort of a fuck-around. This may become apparent before you hit “Sight is the Most Complex,” which intersplices and tape-distorts “Thunderstruck” by AC/DC into its closing moments, but it’ll certainly become apparent by then.

Catch the record on the right moment, though, and you’d be forgiven for thinking something serious is cooking. The bight shining star is “Turkish Spliff,” the EP’s opening track and most fruitful potential direction for these would-be garage dirtbags. It’s the collection’s longest, most complete, most composed track; a wordless, guitar-tone-forward cruiser that invokes the nervy scumball energy of The Men circa Open Your Heart. It’s the sort of track that packages kinetic energy into an audio file and makes you want to go surfing. It gets some of that same bad-guy party dread on “Dead Tabloid Celebrities,” which sounds out of key as a statement of purpose and stylistic choice.

The rest of the collection is a “you get what you pay for” situation (the EP is free on Bandcamp). Really Dead Corpses spend the rest of the time fucking around with genre tourism, trying on grindcore (“Child Soldier Narratives,” which feels twice as long as “Turkish Spliff” despite being a minute shorter), sludge (“State Fair”) and goofing around with the dumber tropes of modern metal (I laughed out loud at the Extra Dramatic spoken word apocalypse vocals on “Sight is the Most Complex,” even before the AC/DC headfake). Say this for the gang: there’s no category fraud going on with their Bandcamp tags.

Ultimately, this is the reason that platform is such an exciting place. It gives you, some asshole on the internet, the chance to listen to what a gang of knuckleheads are playing around with in Duchess County, New York. That’s the dream of The Cable Guy made real, even if you’ve got to be a specific kind of music pervert to want to fulfill it.

Green Day: Father of All Motherfuckers

Handguns: When The Light Burns Out