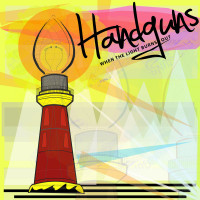 During the peak of the Defend Pop-Punk era, Handguns were a constant, always there standing firm on the front lines. Over the course of six years, the band released two EP’s and three full-lengths, yet never really had that career-changing record to break free from the mold. They existed with those second tier of bands with that “newly-found-old-New Found” sound of the early 2010’s. With each release, they seemed to take the idea of defending their genre a bit too literally. When you’re on “defense,” you’re playing not to lose. You play it safe, cautious of taking chances or being aggressive. That’s been the story so far for Handguns, conservative. (There’s probably a few puns in there.)

Five years removed from 2015’s Disenchanted, the Central PA group resurfaces with their original lineup in When The Light Burns Out. The long layoff provided hopes of both rejuvenation and maturation of their rather youthful sound. Lead single, “Death Cheater,” a track that was distributed over a year prior to the album, gave fans a sign that the band was ready to reintroduce themselves into the scene with a fresh approach. It was faster, sleeker, and lyrically, it led you to believe that they were going for it. The light that eventually burned out after so long as a band was reignited for one last grueling push to make that discog-defining album.

But like most Handguns records, “Death Cheater” stands out with one or two others in a sea of throw-away and formulaic pop-punk songs. Cuts like “Liquid Therapy” and “Paper Lanterns” come off as such low-effort fillers for a band who’s been around for so long. The latter misses the mark in trying to strip their pop and punch in an effort to produce something dirtier and rough.

Handguns are a singles band. Across their catalog, they have some huge pop-punk masterpieces, like “A Year in Review,” “Heart vs. Head,” and arguably one of the catchiest songs from that era in “Porch Light.” On their previous records, there’s always an enormous gap between the hits and the rest of the tracks. This, again, remains true on When The Light Burns Out. For a moment, heavy-hitting opener “Constructive Criticism” brings Handguns back from the dead with its quick onslaught and big, boppy hook. And despite a bit of chorus overkill on “Hardest of Times,” the delivery and structure of the verses make it one of their best songwriting samples in quite some time.

The best way to describe When The Light Burns Out is “frustrating.” Ahhh, it’s right there! You know Handguns have the technique and ability to write massive and memorable songs, but they can never put it fully together to write a massive and memorable record. Here’s to hoping that this was just an exercise to work out the kinks and brush off the cobwebs to come back leaner without the immature pop-punk weight.

Really Dead Corpses: I am The Shark