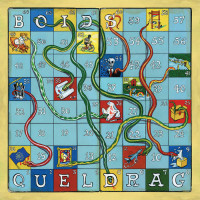 I had a chance to catch Boids live a few years back when they were touring with the Real McKenzies. They put on a really good show so I bought one of their CDs. And since then, I can’t quite figure them out.

When I first listened to Quel Drag, I was a little thrown off. My memory’s a bit hazy, but I recall them having more of a ‘50s, punk ‘n’ roll type vibe. And while that sound hasn’t vanished completely, their new record definitely strays a bit from any sort of traditional punk rock sound. Despite my expectations though, it’s still a refreshing listen.

I’m not really sure what to call this style, but it’s good. I’m sure someone out there has a name for it, but I don’t. The band and the label bill it as “pop-punk new-wave weirdo” rock. And after listening to the record, I suppose that’s a pretty accurate description. My first thought was that it reminded me of Welfare Problems by the Swedish band Randy. And I guess some people could compare it to The Hives or The Strokes (though I’m not all too familiar with these bands). “Eurovision” kicks off the album with a synthy percussion sound before jumping into the verse with crunchy guitar and hi-hat laden drumming. And the rest of the album has a similar feel. Many of the songs are mid-tempo, but my favorite moments are when the band strays from this. For example, “Bike Thief” and “Night Night” are speedy little tunes that are super catchy and fun to listen to. And “There Goes the Neighborhood” is one of the slower tracks on the record, but it’s probably my favorite.

While this isn’t necessarily a sound I gravitate towards, I really enjoy this record. Though the sound stays pretty static, the band throws a bunch of curve balls into the song structures. The punk progressions are still there, but they’re soaked in new wave noise. But all of this is enhanced with sweet harmonies. And just when you think the sound is getting a little too dissonant, they throw in a pop-punk hook to suck you back in. “Guillotine” and “Shrink Wrap” are two good examples of this. It takes a certain skill to be this erratic without soundy sloppy. This album is really tight and it shows that the band has the ability to play around with their sound without losing much luster.

Handguns: When The Light Burns Out

Loathe: I Let It in and It Took Everything