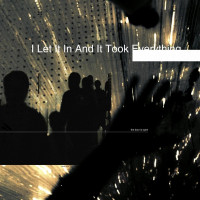 I saw Loathe as third support to Stray From The Path a couple of months back in London. It was a great bill from front to back, but I came away thinking about Loathe a lot more than I expected. I was aware of their debut The Cold Sun and thought it was very good, if not more than that. But at the show, there was something about them. The newer material sounded more diverse yet more cohesive, disparate from the older material in the best way possible. There was also a fire in their bellies in terms of performance. Frontman Kadeem especially, flailing and crip walking around the stage in equal measures. The band played immediately before Christian Metalcore stalwarts The Devil Wears Prada and although the latter put on a good performance, the difference in impact was stark to say the least.

Afterwards, I mentioned the show to a few quasi-industry folk I know and was told in short that I had only seen the tip of the impending iceberg. Indeed, they were far more effusive than that, but I’ll try to explain what this record sounds like and represents from my perspective, not theirs. In short, I think Loathe have made something quite special with I Let It in and It Took Everything. A good starting point for why, is genre. Because I don’t know that any one genre comes near to sufficiently encapsulating the sound of this record. If I were to be as bold as to try and coin a phrase for it, then maybe ‘hardcore new romantic’? Yes, there have been other bands that have incorporated disparate, light and dark soundscapes into a single record, but few of them in my experience do it as well as Loathe do here.

The album opens with an intro track entitled “Theme” which is 90 seconds or so of swelling synth that feels introspective more than aggressive; which you might have initially expected with a band called Loathe. Then comes recent single “Aggressive Evolution” which introduces you to some of the more recent developments in sound and style. There are pounding hardcore sections with tech-level syncopation, but also soaring, melodic chorus and post-chorus sections that take the song to a totally different place before the track culminates with an elongated electro-glitch-infused breakdown. When the next track (“Broken Vision Rhythm”) kicks in, then you might think you understand what the album is, given it’s another rager with riffs and aggression in abundance. But it’s when the next track, “Two-Way Mirror” kicks in, that things get really interesting.

From here on in, it’s impossible to anticipate what is coming next. Both in terms of tracks, but also within the tracks themselves. To save anyone bringing it up in the comments, yes, there is a healthy dollop of Deftones influence in the song and in some others as well, but there are few outside of the Deftones camp who execute that particular trick of being brutal and beautiful in equal measures really well, and Loathe are one of those who demonstrably can. The song feels patient, lovelorn and importantly, not an obvious addition to the record — yet it entirely makes sense in the context of the whole album and is of unquestionable quality. The song finishes and leads into a 90-second or so ambient electronic interlude; “451 days” including a barely-audible spoken word clip deep in the mix. Again, not exactly by-numbers, is it?

It’s tempting to do a play-by-play for the whole record because it’s incredibly hard to describe the overall impact without going into the specifics. At various times there are ambient passages, throbbing 80’s basslines, savage hardcore and in the case of “Heavy is the Head That Falls with the Weight of a Thousand Thoughts” the band go into almost full black metal territory before closing with an acoustic guitar outro. All of this played through structures ranging from pop to tech metal. But as well as the wild diversity and genre-bending, there are both standout songs and moments. For me, “Screaming” and “Is It Really You?” Do maybe the best job of combining all of the elements that make up Loathe in 2020.

There is undeniably a little personal satisfaction at play when I listen to this and think about my reaction to seeing Loathe before Christmas as mentioned above. Not least of all as I’ll be able to talk to anyone who questioned my obvious enthusiasm afterwards and tell them quite smugly ‘I fucking told you so’.

The Jasons: Blood In The Streets