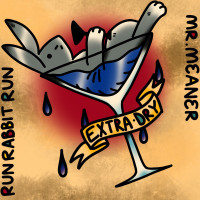 Run Rabbit Run has been on the top of my list of bands to watch for a few months now, and I’ve heard some rumblings about Mr. Meaner, despite having spent as much time chasing down information on them, which brought, for me, a complex and exciting new split that was right up my alley. Abby Finch, Austin, and crew (RNR) bring a real poppy take on the folk punk genre, which is something it's been lacking for some time, while Mr. Meaner brings a country/rockabilly/rock and roll vibe, that though slightly clashing,make for a very fluid split going from poppy clear vocals to country inspired riffs with straight growling and yelling bringing it up a notch.

The album starts with RNR delivering my second favorite track of the record “Full Disclosure”. This had been released on a previous EP by the band, but it seems to have a different sound with it here. You get a good idea of Abby’s vocal abilities right from the start. Imagine an slightly more innocent Agent M (innocent sounding at least) over riffs from a band like the bombpops, but played in a style reminiscent of early days n daze, and somehow you’ve got this amalgamation that becomes, for me, the band to watch in 2020.

RNR follows with a reckless jam “Cosmic Comedy” that really gives you a taste of their second singer, Austin. The band volley’s back and forth between singers, and while I prefer the music and lyrics sung by Abby, it does show an extreme versatility to have two tracks that are so totally different, yet by the same band. I’ve got to give props to the track “Expand and Release”. I believe Abby has stepped out of the “cutesy” and into the “real”. Not to take away from songs like “Nostalgia Pasta” which I love, but “Expand and Release” shows a very clear maturity from some of the previous tracks. I actually think the “cutesy” tracks like “Full Disclosure” and “Nostalgia Pasta” are tracks that easily rival those of bands like Green Day, Paramore, and whatever other bands still get radio airplay, in quality of a song that could make it to the radio, but it's the deeper cuts, the ones where the puns are less present, and she is speaking to more “real” subjects, that set her apart from any band like this in the current scene.

The final two RNR tracks are Austin led tracks, that really help lead into the Mr. Meaner side of the album. Austin’s vocal stylings are more reminiscent of a traditional punk/hardcore singer, and the music seems to follow the singer, again, causing a duality within the band that is much like listening to two completely different artists.

Mr. Meaner start their side with “Corners”, but really start to shine with their second track “Fast Talker”. The sloppy vocals, paired with a jazzy horn and percussion section, which shines with a catchy sax riff, caused me to wonder what the hell I was actually listening to, but in the best possible way imaginable. I couldn’t understand a word I was hearing, but I was tapping my foot along to the song, and pretending to sing some made up lyrics that “sounded” right. It was pure and total chaos, somehow controlled by this group of musicians who found harmony in dischord.

Mr. M slow it down for the intro on the next track “Dust Lament”, but quickly speed it back up, and those sloppy, nearly unintelligible lyrics explode just as the beat picks up. Despite the lack of understanding of the lyrics, I’m not really taken aback by the vocal styling, as it seems to fit into the chaos that this band is creating. The final two tracks don’t differ much from the rest of what I have seen of Mr. Meaner. While their style is extremely original, I don’t feel the originality between one song and another, save for the stand out track “Fast Talker”. These guys are really new to the scene, but their ska-influenced cowpunk style is definitely right up my alley, so I’ll have to keep listening, and hope with maturity as a band come some follow-up to the initial creativity that they’ve displayed.

All in all, I was much more pleased with the Run Rabbit Run tracks, especially those led by Abby Finch, but neither of these bands are going to have a problem making a name for themselves in the punk and/or folk punk scenes, as they are both great songwriters. It honestly wouldn’t shock me if Abby Finch became the next Paramore. She has these pipes that seem unparalleled, and a backing band that knows exactly what and when to play for her strengths to shine.

The Jasons: Blood In The Streets