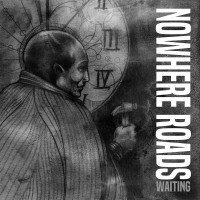 Nowhere Roads have been putting out quality hardcore for a few years now, and this is their first seven-inch for Safe Inside Records. What’s offered here are three dynamic and modern hardcore songs from a band that has their sound pretty well dialed in. What impresses me most about Nowhere Roads is their consistent ability to blend melody with heavy.

The first song on the seven-inch, “Prosper,” is a thudding hardcore song that blends clever guitar harmonics, pounding drum beats, and chopping mosh-ready riffage. The song is at once melodic, especially in the octave guitar tracks, and discordantly heavy. The vocals blend a guttural scream with more shouted lyrical delivery that makes for an apt complement to the music. The vocals aren’t incomprehensible either, which is almost always a plus in the hardcore genre. The lyrical content seems to touch on the nature of greed and one’s ability, or lack thereof, to carve out a stable life. But it's in the second half of the song that Nowhere Roads really drive home a great balance of melody and heavy, making for layered and compelling hardcore.

“D & D,” the second track, offers a bit more dynamism between the guitars, drums, and vocals. The melodic guitar tracks blend with aggressively spoken lyrics, making for an ingenuitive and catchy song. That the track comes back to the more tightly wound intro riff towards the end makes for a great closure and balance to the more ambient aspects that dominate the verse and bridge. There’s a real sense of musicianship to "D & D"  that makes it the best on the seven-inch for me. The lyrical content is matched well with the guitar and drum work in such a way as to create a sense of urgency and earnestness in delivery. That's not easily done.


The seven-inch’s final song, “Waiting,” opens with a frenetic drum roll that moves along just in front of well-written melodic hardcore riffs. From there, the song segues into chopping guitar tracks that give it a much clearer sense of heaviness. This song is a bit closer in style to “Prosper” in offering a balanced attack of melody and chopping heavy guitar tracks. The open ring outs that leading into the song’s eerie breakdown do well in allowing the vocals to take center stage. As that breakdown moves into focus, the song opens up into some really clever eerie guitar tracks only to conclude soon thereafter. Despite being nearly four minutes in length, the song’s closure left me wanting more. A sign of strong song-writing for sure.

Nowhere Roads’s seven-inch is three strong modern hardcore songs. The biggest drawback here is that we don’t get more from the band. The release really left me wanting more. But perhaps that’s a good thing? This is definitely a release worth picking up, especially for those who like their hardcore in the Comeback Kid or Stretch Armstrong end of the genre.