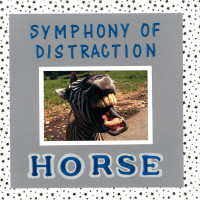 Cali's Symphony Of Distraction, and the release of Horse, completely missed the mark on any of my radars, but after two weeks of countless rotation it has rendered to be (easily) one of the most complete and pristine skate punk releases of the last fifteen years.

Horse's arsenal of pop punk Easter eggs and homages button up a tremendous home run. The fifteen song ripper is so rich with moments, I have written this review a bit differently. The LP opens with the oldest trick in the book as "Once and Future" drones on a familiar lo-fi guitar intro *[early No Use For A Name.] Fast double time rushes to a pitted bridge, and the outro hangs on without resolve just a few extra seconds too long, just to zip it into *[think the energy of whatever track 2 on Life in General is] "I Wish I Wasn't." "Progress" reminds me of *[early Home Grown], with welcoming stops placed throughout the groove, and needed *[woah tracks] and *[dissonant three part harmonies.]

As we continue on and I discover that my *[Pop Punk For Dummies] legend hasn't been scrapped by the editors, let me disclaim that these comparisons parallel with the pile of talent that Symphony Of Distraction possess. The dual vocal four piece is commanded by a rhythm section of a-list qualities, particularly drummer Jimmy Law, who doesn't let up tempo for a second of the session. This review will be riddled with comparisons to other artists, but Symphony Of Distraction have their own sound and take on the preservation and sustainability of pop punk in present time.

"Rain Check" clocks *[jealousScreeching Weasel angst] in just 0:53, while "United Failure" drags the tired, cliche *["Here we go!" hook] instead into the brain of a young man proposing to the high school sweetheart he knows he has given up his true dreams for. "Don't Try," "Mayday," and "Legacy" all fill the gaps, with more variation in tempo, guitar work, and (of course) *[obscure samples from movies and television.] This trick may have been over-utilized, but one of them made me nearly piss myself laughing so I have let it slide.

The upbeat motivation behind "Uncomfortable Shoes" is deep writing, as is all of the more serious cuts of the bunch. This was refreshing, as my research brought me to one championed Punknews colleague's reaction to some... it was referred to as "rough touch lyrics" found in 2010's Pudwack. This instills growth, and level-headed writing, which carries the album to "Throw It All Away." "You're Not Crazy" offers some of the most clever and honest songwriting, with subjects of substance abuse, displacement, and serotonin reuptake inhibitors *[knowing the mental health of your target demographics.]

"Piece of Shit" was the first song on the record I listened to, citing *[hey there is some undoubtedly auto-tuned vocal] qualities of what sounded like a modern Teen Idols song, into the *[Ergs!y™] qualities of "Too Old for Drugs." "Splat" is a refreshing moment of Horse, as the writer questions suicide, and gets over it in less than 30 seconds. The masterpiece completes with a *[Tecmo Bowl NES sample] into the uplifting outro of "Going Home," which slams the album's door shut in two minutes.

Horse is fantastic for any fan of classic pop punk, and Symphony Of Distraction have managed to wrap a 46 gauge Ernie Ball Hybrid Slinky lasso around a very important set of musical preferences from 1999 that I can't seem to shake. Spectacular album.