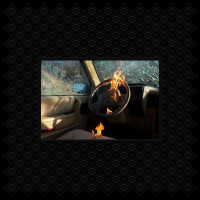 Alt-rock darlings The Afghan Whigs were cut from the 80s Sub Pop cloth, but quickly deviated in their own unique direction. The Ohio natives began infusing heavy doses of R&B and soul influences into their grunge base, creating a sound marketable enough to let the band ride a wave of major label releases throughout most of their career. The Whigs broke up in 2001, only to reform a decade later, eventually releasing 2014’s Do to the Beast and 2017’s In Spades.

Following the release of In Spades, while the rest of the band was pulled away for other commitments, and with the tragic passing of guitarist Dave Rosser, Afghan Whigs frontman Greg Dulli took his next batch of material upon himself, putting together his first solo album, Random Desire. On it, Dulli takes note of where modern rock sits in 2020, which is a long way from where it was when he began his career. He pays homage to the present state of the craft; he neither insults it, nor fully encompasses it. If nothing else, it provides the springboard on an album he mostly played by himself. The spatial experimentations and deep layering set Random Desire apart from (most of) what we've heard from Greg Dulli in the past. No curse of the solo debut here.

On the opener and first single “Pantomima”, Dulli perhaps comes dangerously close to falling completely into the synth heavy, dance pop sensibilities that, for some reason, are today's modern rock. But, as on the flourishing and uplifting “The Tide”, Dulli holds the reins loose enough for us to have fun, but doesn’t let the experiment fly away. “Sempre” and “It Falls Apart” go for the much more classic alternative sound of Dulli’s younger days, especially bringing to mind his former label mates Mudhoney.

The acoustic guitar repeats the same simple melody throughout “Marry Me”, as though it is as stuck as the miserably separated protagonist, quietly contemplating how low is too low to go, now that it’s over. Dulli lets the words flow out like syrup on “A Ghost”, as a sort of a beatnik tango, rooted in self-destruction and escapism. The minimalist Berlin beats of “Lockless”, along with their successors on the back third of the album “Black Moon” and “Slow Pan”, showcase Dulli’s vocals better than anywhere else here. His mournful chameleon vocal range, approximately a cross between Nick Cave and Jarvis Cocker, allows a marker for any mood he may come across- be it hopeful, destructive, sexual, nostalgic- on the long line between his chest voice and his head voice.

I admit that there were times during Random Desire that I certainly shrugged in apathy. Dulli layers everything very nicely; there’s lap steels, harps, organs, pianos, castanets. But some of the songs here are rhythmically and melodically just very flat, which doesn’t mix well with such a dense foundation. Nevertheless, this is still a standout release from a man whose unique vision set himself and his band apart at a time when they could’ve just as easily been swallowed up as a passing fad. 35 years later, he’s still not done changing it up.

Miguel Chen: The Death of You: A Book For Anyone Who Might Not Live Forever