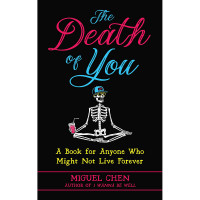 The Death of You: A Book For Anyone Who Might Not Live Forever (2019)

Miguel Chen, bass player for Teenage Bottlerocket, has a lot going on. Besides that rather cool main gig, Chen also teaches at Blossom Yoga Studio in Wyoming and writes books. His latest, The Death of You, is an interesting dive into death.

Chen is notable for his philosophical approach and mindfulness. During his life, Chen has had some incredible and, at times, difficult, life experiences. He lost his mother to cancer when he was still a teenager. He then lost his sister a few months later to a car wreck. And more recently, he had to deal with the loss of his bandmate and friend Brandon Carlisle. By his own admission, he hasn’t always coped well, sometimes wandering into territory that was largely disjointed and damaging. However, with age came some new perspectives; Buddhism brought a new angle to Chen and led to his first book, the excellent I Wanna Be Well. In his new book, The Death of You, he offers a matter-of-fact account of his experiences with death, explaining the circumstances, his struggles, and his evolution in thought and practice.

Chen approaches death from a perspective of acknowledged struggle and challenge, but also with something that borders on warmth. Throughout, he tackles the subject from various angles, alternately positing the difficulties of death (in chapters addressing his various experiences that make him qualified to write on the subject) and confronting ideological and spiritual hurdles that people of different backgrounds have to deal with.

Amongst various recitations and practices, a handful of philosophical concepts stood out as thought-provoking conceits. Early on, Chen addresses the difference between pain (which he describes as temporary struggle before moving forward and accepting reality) and suffering (which he describes as long-term struggle marked by clinging and an aversion to reality). He also does a treatise on various religious approaches, going after heaven, hell, rebirth, nothingness, and universal oneness in one fell swoop. In doing so, he never really disparages any one concept but instead discusses the approach of each idea in what comes across as an even-handed examination. And as the book moves on, he takes on various ways of dying, discussing the experience of an expected death, a surprise death, a suicide, and a murder, each being discussed with a realness and compassion that are considerable. Chen even gives over several chapters to practices, mostly meditative, that’ll help people prepare for the death of others and the death of themselves. While The Death of You is no final word on death, Chen does have a lot of bases covered.

The Death of You is not a “fun” read. Even with moments of levity that come with a few of Chen’s rather funny comments, digging into death like this isn’t exactly fun. But he’s got plenty of insight and can really get you thinking. It’s good stuff. Recommended.